I supported a financial analytics system for a utility based in El Paso, Texas. Before I visited El Paso for work I knew virtually nothing about the area, the economy, or the people. One of the most interesting and unexpected benefits of my career was the opportunity to extensively work in areas of the USA that I never would have visited otherwise.

One thing I did know is that 1) Texas has its own electricity grid that ‘walls it off’ from the rest of the USA called ERCOT 2) the El Paso area was “outside” of that grid. Thus while Texas may be its own separate country in their mind, El Paso was something else entirely.

The managers I met in El Paso said it would likely make more sense for El Paso to be part of New Mexico, rather than Texas. Many of the managers lived in New Mexico. A funny story they told was how many Americans believed that New Mexico was NOT part of the United States, and stories like this were collected in the back page of a local magazine and they were often hilarious.

While flying to New Mexico one day I sat next to a gentleman that was frequently in El Paso for business. At the time, Ford Expedition SUVs were all the rage. He said that the last three times he visited El Paso, he selected an Expedition from the local rental car affiliate, and the car was stolen (and likely driven over the border into Mexico). I didn’t ask him why he was so stubborn and kept renting them.

While shopping in El Paso or eating in a restaurant it was common for wait staff to first address you in Spanish and then switch to English if you didn’t speak Spanish. I was usually working with someone from El Salvador so he took over when we met people that spoke no English at all. This happened occasionally.

At night you could see Juarez over the border, and people seemed to traverse the border frequently. Juarez was booming at the time, and El Paso’s economy seemed stagnant. Things have changed greatly in the 20+ years since I worked in El Paso and I think things have reversed.

We drove out to Cattleman’s Steakhouse, a restaurant with a large outdoor area that also doubled as a movie set, about 35 miles outside of El Paso. I remember driving through the desert which was a trip since it really seemed to be the middle of nowhere.

As I wrote this article I realized that one of the few pieces of original art that I have ever purchased came from a small shop in El Paso – it is called “The Long Haul” and I paid $20. At the time when I was there the Mars Volta was big and there was a burgeoning art scene… 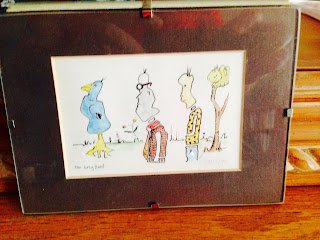