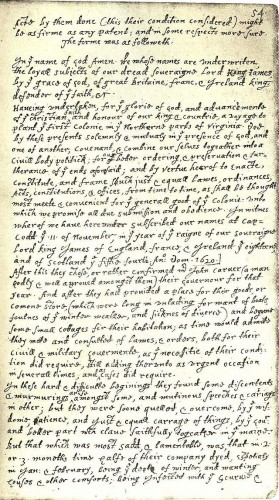 In the name of God, Amen. We, whose names are underwritten, the loyal subjects of our dread Sovereign Lord King James, by the Grace of God, of Great Britain, France, and Ireland, King, defender of the Faith, etc.

Having undertaken, for the Glory of God, and advancements of the Christian faith and honor of our King and Country, a voyage to plant the first colony in the Northern parts of Virginia, do by these presents, solemnly and mutually, in the presence of God, and one another, covenant and combine ourselves together into a civil body politic; for our better ordering, and preservation and furtherance of the ends aforesaid; and by virtue hereof to enact, constitute, and frame, such just and equal laws, ordinances, acts, constitutions, and offices, from time to time, as shall be thought most meet and convenient for the general good of the colony; unto which we promise all due submission and obedience.

In witness whereof we have hereunto subscribed our names at Cape Cod the 11th of November, in the year of the reign of our Sovereign Lord King James, of England, France, and Ireland, the eighteenth, and of Scotland the fifty-fourth, 1620.

Thanks to all the people who came to America at the hazard of life and limb and who built this country and gave it to us to build up and make better and pass on in our turn.

God bless the Pilgrims who settled in New England and brought (almost) the first seeds of Constitutional self-government to this continent. They arrived in what is now Massachusetts on November 21, 1620 (under the current calendar). It is cold in Massachusetts in November. They had thousands of miles of stormy sea behind them, and a cold, bare, unfriendly wilderness before them, not a single roof or fireplace for shelter or warmth. It was touch and go. They lost many of their number during the first winter. They had many practical details to attend to when they arrived. But the first thing they did before they set foot on the new continent was to covenant and combine themselves in to a “civil body politic” to live under law and by orderly political processes. We can learn from their example.

God bless America. God bless our Chicago Boyz contributors and readers. God bless our service members, past and present, especially those in harms way to defend our nation. God bless the people travelling and staying with families.

Thank you to Jonathan for starting this blog in 2002 and keeping it going.

May there be peace and happiness in all homes and across the land — and if we fall short of this high standard, here and there, let us work to do better in the days ahead.

I hope no one is too busy poking around the Internet and not paying attention to the turkey. Make sure you don’t over-cook it. May the gravy come out perfectly, and may there be enough pie for everybody to get two pieces of the kind they like best. 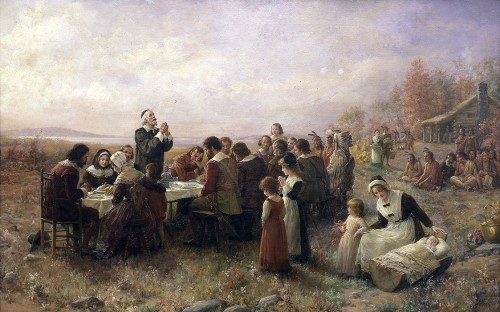