I have not seen a formal study of the impact of technology on mass transit but I believe that it has made it profoundly more valuable and useful. And I accidentally participated in an experiment that partially proved this statement in the inverse.

In Chicago they have a CTA “bus tracker” that tells you when a particular bus will arrive at your stop. Or you can program it so that you can see all the buses from various routes that are coming past your stop (this is useful because in Chicago you can often take many different routes that go to the same place over shorter distances). It works on your phone and many of the newer stops have the bus tracker programmed into the canopy so you don’t even need to look it up on your phone.

Sadly enough most days rather than looking up the street for buses I check the bus tracker. I can usually get from my condo down the elevator and past the lobby in 2-3 minutes so 4 minutes is the cut off time. One morning I looked and I thought I had missed the bus entirely because the next one was ten minutes away on my phone. However, instead of just trudging off, I looked up, and a bus was right there! 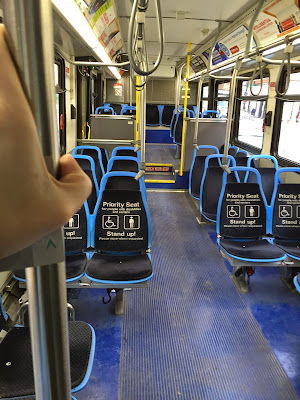 I got on the bus and it was completely empty! Not a soul was on the bus. While it was a nice day, usually this bus line was crowded during rush hour, often so crowded that I don’t even bother getting on because I have to stand right in the front past the yellow line where you aren’t supposed to stand and then get on and off with every stop (to let people on and off) until the crowd thins out.

The driver was totally bewildered too. I sat with her up front and I guess they had changed the bus she was driving to this route (from another route) and they hadn’t updated bus tracker. I said that because she didn’t show up on my bus tracker. Thus no one was on the bus – because if it wasn’t on bus tracker, it didn’t exist.

I am sure that the River North area is one of the most technologically sophisticated areas of the city and probably in other parts of town people just wait at the bus stop for the bus to show up. But in River North – everyone has been trained to use bus tracker and rely on it and they wouldn’t contemplate a bus existing that wasn’t on bus tracker.

For me, the bus tracker has made the Chicago bus go from something marginally useful to a highly useful way to get around town. When I lived in Bucktown we used to wait for the #50 Damen bus and 3 of 4 times we’d give up and grab a cab after waiting 15-20 minutes and the 4th time 2-3 buses would show up in a big bunch full of angry riders. If you took the bus you weren’t happy about it; it was an unreliable and slow way to get around.

However, bus tracker is very reliable and now you have visibility of what is coming and you can plan ahead so that you are whiling away your day standing outside in the rain or snow waiting in vain for a bus that seems like it will never come. I don’t have statistics but I would bet that bus tracker increases utilization of assets for the CTA and has become a known and reliable method of transportation for those that give it a chance.

24 thoughts on “Technology and Mass Transit”