Recently I saw this little blurb in the NY Times business section which perfectly encapsulates one of the most important lessons I’ve learned in all my years of working – it is all about cash flow. 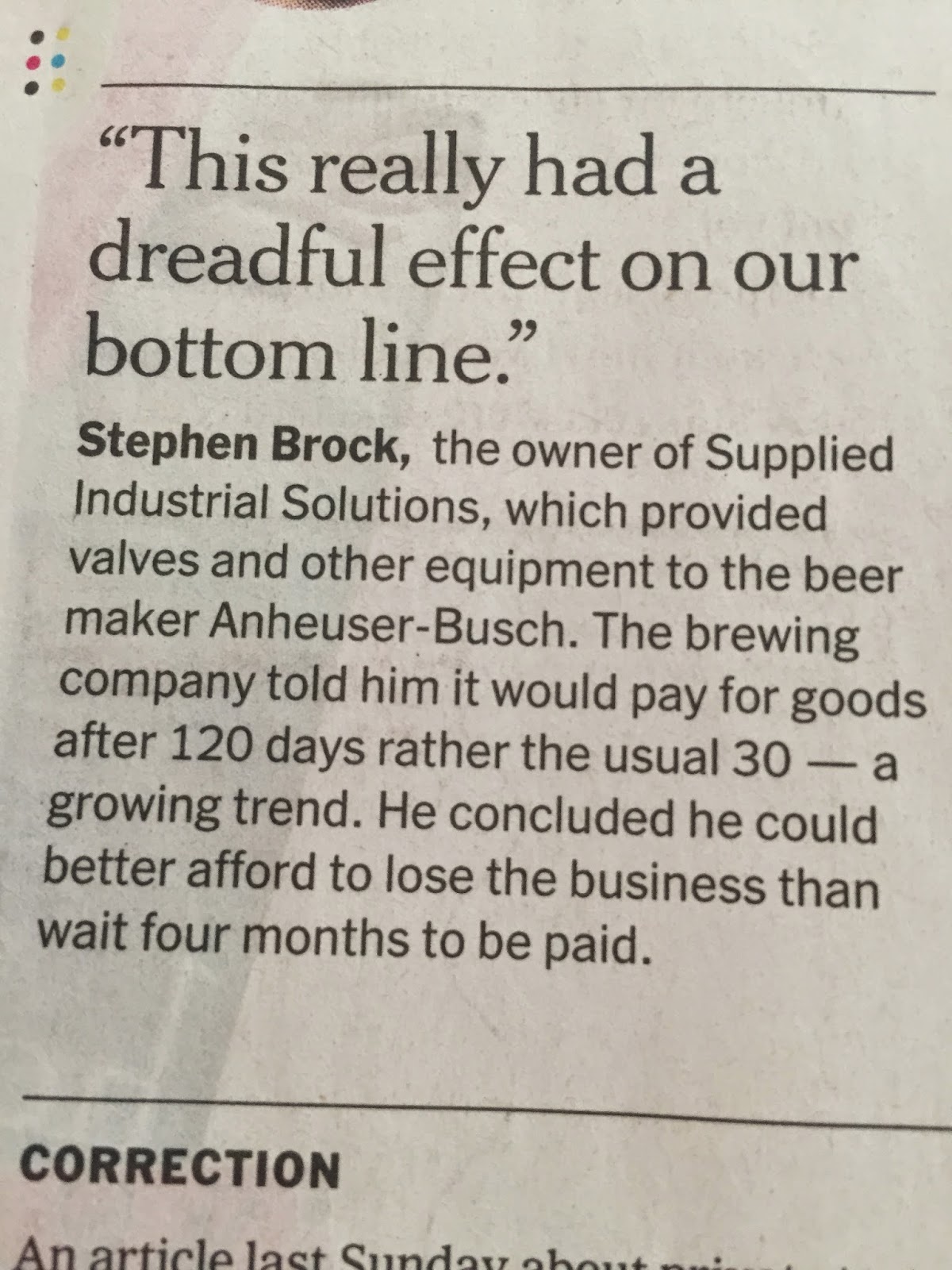 The simplest measure of success for a business is bringing in more cash than you pay out and having a positive bank account balance at the end of the month. When you are in charge of a business and attempting to make your payroll these sorts of concerns should always be “top of mind”.

Cash Flows in a Smaller Firm

When we started our consulting firm you had to put up enough capital to pay salaries for a while (we took a small “draw” to keep us afloat, not our former total compensation) until we were able to bring in cash from customers. However, this is a longer process than you might imagine if you weren’t educated in the realities of all the crucial steps in the chain necessary to get paid. Since we were accountants and finance people we went into this with “eyes wide open” but I can only imagine the types of trouble that creative types meet up with when facing this same conundrum.

Thus our sequence of cash flows at a high level when starting up a consulting firm looked like this:

– Additions – capital contributions from partners. Based on the equity you wanted in the final firm, you needed to put in capital (that maybe you’d never receive back) to start up the firm
– Additions – loans. We didn’t take out loans but we could have. Banks generally never loan you money unless you have collateral and we didn’t so it would have been credit card debt at the time
– Reductions – office space and rent. We needed to start somewhere. Initially we just used a room in our boss’s house, which worked out fine, and later we rented a space near a bowling alley. Note that everyone you are renting from eyes startups with a rueful glance and you can’t expect to get much in the way of credit because they don’t want to end up holding the bag
– Reductions – insurance, legal fees, taxes, office staff, computers. All the ephemera of an office needed to be purchased but we did it second hand. We also used our own skills rather than hiring third parties whenever possible (almost all of the time)
– Reductions – payments to core staff. We used “draws” which were minimal amounts to cover life expenses and in a way were payments in advance of what you’d earn, not like a salary that you receive regardless of the end state of the enterprise and your personal contribution. For office staff we picked up later we needed to pay them a normal salary

All of this happened before we even met a potential customer. Then we needed to fly out and meet customers (we already had a lot of connections; much of our early success came from bringing on existing clients from former consulting firms), convince them to sign us up, agree on a price and contract terms, and then begin doing the work.

After all this is done, then you need to actually “bill” the client. In many places this was delegated down, and the consultants didn’t take the process very seriously. I know of consultants in other firms that didn’t file their expense reports for months or years and didn’t put their time in a common system so that hours and days were lost. Since office staff rarely take things that seriously and are outranked by consultants (with advanced degrees), usually billing is a haphazard and incomplete affair.

However, in our initial firm, I did the billing myself, which meant that it occurred with military precision and zero defects. I knew all the consultants and when they were traveling and would empty their computer bags and take their receipts and bully them into telling me the hours that they worked. Then I would put it all in a spreadsheet and database and have someone cut out all of the receipts and tape them on paper and created a summary document that tied out to the penny. Then I would double check everything and the summary invoice with time and labor (80% of the costs) and the expenses (20% of the costs) would be hand delivered to the client within a few days of the end of the month (we captured data weekly so that I wouldn’t be trying to remember 4 weeks back at the end of each month). I am very experienced in accounts receivables / billing / payables and I knew exactly how to package everything and reconcile it against the purchase order that we had received from the client, and I would have all the materials so we could clearly bill the client each month.

Doing all of this allowed us to take probably 30-60 days out of the cash cycle as far as delays; our clients were large utilities and they didn’t care about cash flows; they would pay us “whenever” as long as it was within the terms of the contract (usually net 30). They DID care about minor expenses and odd billing discrepancies (always immaterial). Let me tell you a story about that…

One time we all went to dinner (about 10 of us) and it was a fiasco. The food was cold and not what we ordered and finally the restaurant comped us for 90% of it (we were served something else so we made out OK) and in the end I left them a $100 “tip” because the remaining bill was so small and we didn’t want to screw all the wait staff who served us for what turned out to be a 2-3 hour meal. However, I made the mistake of putting the meal with the “$100 tip” in the packet to the client. Even though this didn’t even represent 1% of the current months’ bill, for months to come the client was ribbing me about “being a big tipper” and this item just would not die. In hindsight of course the firm (us) should have just “eaten” the bill because this is exactly the type of irrelevant and inconsequential item that I should have known would have caught their eye.

Another time someone close to me was very creative when she was the CFO of a small startup; she convinced their largest client to pay in advance for a full year of service. To the client this was a great deal; they had money available in their current year budget (that they were going to lose) and since they didn’t care about the timing of cash flow (just expenses, assuming it was tracked correctly at all) they were glad to pay up front. To a small firm like that, eliminating the 120 days typically that drag between getting the current month’s revenue turned into cash was a godsend, and it enabled that firm to live on for another year and a half. In the end they went belly up (like most startups) but this sort of advance cash gave them time to at least attempt to grow and flourish rather than scrape by.

One time I was dealing with a large company that represented 75% of my small firm’s revenues. They were switching from manual checks to electronic payments. They sent a seven figure amount to our firm… as a physical check AND as an electronic payment. For a variety of reasons I was very familiar with their accounts payable group (we were installing a financial system for them) and I was quite confident that their team would NEVER figure it out. But we did the right thing and went to the CFO and gave him the physical check back and of course he was chagrined. Then, the next month, the same exact thing happened and AGAIN we gave him back the physical check. For all I know they were double paying many vendors but that’s a fact I cannot verify.

Recently I was working with a real estate professional who said that it NEVER makes sense to kick out a paying tenant. You ALWAYS want them to renew their lease, even if you end up forgoing the rate increase you COULD have charged the new tenant. By the time you have a unit idle for 30-60 days you’ve lost 2 months rent and if your new rent is 5-10% higher than your old rent (a great situation, BTW) then it will take years to make up that lost cash flow.

In all of these cases the critical nature of cash flow is apparent, but this isn’t something that is normally taught in college to the extent that is needed in the “real world”. The smaller elements of your accounts receivable (getting cash from customers) and accounts payable (paying to third parties) really can make or break your company and it requires laser focused attention.

If you remember anything about small business and entrepreneurship, it would be “Cash is King”.

14 thoughts on “25 Stories About Work – It’s All About Cash Flow (Part I, Small Companies)”