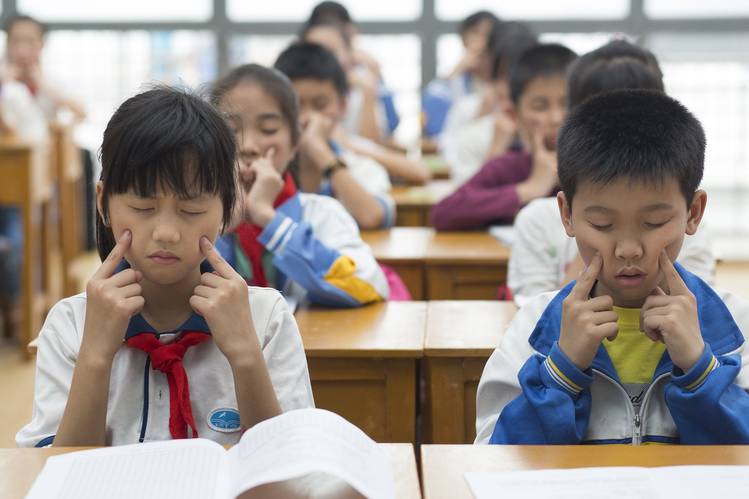 A couple of interesting articles about the increasing incidence of myopia in children.

Myopia isn’t an infectious disease, but it has reached nearly epidemic proportions in parts of Asia. In Taiwan, for example, the percentage of 7-year-old children suffering from nearsightedness increased from 5.8 percent in 1983 to 21 percent in 2000. An incredible 81 percent of Taiwanese 15-year-olds are myopic.

The first thought is that this is an Asian genetic thing. It isn’t.

In 2008 orthoptics professor Kathryn Rose found that only 3.3 percent of 6- and 7-year-olds of Chinese descent living in Sydney, Australia, suffered myopia, compared with 29.1 percent of those living in Singapore. The usual suspects, reading and time in front of an electronic screen, couldn’t account for the discrepancy. The Australian cohort read a few more books and spent slightly more time in front of the computer, but the Singaporean children watched a little more television. On the whole, the differences were small and probably canceled each other out. The most glaring difference between the groups was that the Australian kids spent 13.75 hours per week outdoors compared with a rather sad 3.05 hours for the children in Singapore.

This week the Wall Street Journal had more. There are some attempts to deal with the natural light effect.

Children in this small southern Chinese city sit and recite their vocabulary words in an experimental cube of a classroom built with translucent walls and ceilings. Sunlight lights up the room from all directions.

The goal of this unusual learning space: to test whether natural, bright light can help prevent nearsightedness, a problem for growing numbers of children, especially in Asia.

The schools have tried to get Chinese parents to send the kids outdoors more but it doesn’t seem to work.

And it isn’t limited to Asians.

In the U.S., the rate of nearsightedness in people 12 to 54 years old increased by nearly two-thirds between studies nearly three decades apart ending in 2004, to an estimated 41.6%, according to a National Eye Institute study.

But Asians with their focus on education are the most effected.

A full 80% of 4,798 Beijing teenagers tested as nearsighted in a study published in the journal PLOS One in March. Similar numbers plague teens in Singapore and Taiwan. In one 2012 survey in Seoul, nearly all of the 24,000 teenage males surveyed were nearsighted.

Though glasses can correct vision in most myopic children, many aren’t getting them. Sometimes this is because parents don’t know their children need glasses or don’t understand how important they are for education. Other times, cultural beliefs lead parents to discourage their children from wearing them, according to Nathan Congdon, professor at Queen’s University Belfast and senior adviser to Orbis International, a nonprofit focused on preventing blindness. Many parents believe glasses weaken the eyes—they don’t.

Getting kids to spend even small amounts of time outdoors makes a difference.

Why myopia rates have soared isn’t entirely clear, but one factor that keeps cropping up in research is how much time children spend outdoors. The longer they’re outside, the less likely they are to become nearsighted, according to more than a dozen studies in various countries world-wide.

One preliminary study of 2,000 children under review for publication showed a 23% reduction in myopia in the group of Chinese children who spent an additional 40 minutes more outside each day, according to Ian Morgan, one of the researchers involved in the study and a retired professor at Australian National University in Canberra. (He still conducts research with Sun Yat-sen University in the Chinese city of Guangzhou.)

That is a very significant effect of small changes in behavior. Now the researchers are trying something new.

Dr. Morgan, Dr. Congdon and a team from Sun Yat-sen are now testing, as reported recently in the science magazine Nature, a so-called bright-light classroom made of translucent plastic walls in Yangjiang to see if the children can focus and sit comfortably in the classroom. So far it appears the answer is yes.

In 2007, Donald Mutti and his colleagues at the Ohio State University College of Optometry in Columbus reported the results of a study that tracked more than 500 eight- and nine-year-olds in California who started out with healthy vision6. The team examined how the children spent their days, and “sort of as an afterthought at the time, we asked about sports and outdoorsy stuff”, says Mutti.

It was a good thing they did. After five years, one in five of the children had developed myopia, and the only environmental factor that was strongly associated with risk was time spent outdoors6. “We thought it was an odd finding,” recalls Mutti, “but it just kept coming up as we did the analyses.” A year later, Rose and her colleagues arrived at much the same conclusion in Australia7. After studying more than 4,000 children at Sydney primary and secondary schools for three years, they found that children who spent less time outside were at greater risk of developing myopia.

What is the mechanism ? Maybe it is this.

The leading hypothesis is that light stimulates the release of dopamine in the retina, and this neurotransmitter in turn blocks the elongation of the eye during development. The best evidence for the ‘light–dopamine’ hypothesis comes — again — from chicks. In 2010, Ashby and Schaeffel showed that injecting a dopamine-inhibiting drug called spiperone into chicks’ eyes could abolish the protective effect of bright light11.

Retinal dopamine is normally produced on a diurnal cycle — ramping up during the day — and it tells the eye to switch from rod-based, nighttime vision to cone-based, daytime vision. Researchers now suspect that under dim (typically indoor) lighting, the cycle is disrupted, with consequences for eye growth. “If our system does not get a strong enough diurnal rhythm, things go out of control,” says Ashby, who is now at the University of Canberra. “The system starts to get a bit noisy and noisy means that it just grows in its own irregular fashion.”

Another possible treatment is the use of atropine drops in the eye.

Atropine, a drug used for decades to dilate the pupils, appears to slow the progression of myopia once it has started, according to several randomized, controlled trials. But used daily at the typical concentration of 1%, there are side effects, most notably sensitivity to light, as well as difficulty focusing on up-close images.

In recent years, studies in Singapore and Taiwan found that a lower dose of atropine reduces myopia progression by 50% to 60% in children without those side effects, says Donald Tan, professor of ophthalmology at the Singapore National Eye Centre. He has spearheaded many of the studies. Large-scale trials on low-dose atropine are expected to start soon in Japan and in Europe, he says.

More than a century ago, Henry Edward Juler, a renowned British eye surgeon, offered similar advice. In 1904, he wrote in A Handbook of Ophthalmic Science and Practice that when “the myopia had become stationary, change of air — a sea voyage if possible — should be prescribed”.

5 thoughts on “Myopia and why it is increasing.”