I have previously expressed concerns that Saudi Arabia was in a fight for its life.

The question is whether the Saudis will fall to their own Shiite population and whether the capture of Aden will allow Iran to block Saudi oil shipments.

“Once hailed by President Barack Obama as a model for fighting extremism, the U.S. counterterrorism strategy in Yemen has all but collapsed as the country descends into chaos, according to U.S. and Yemeni officials.”

As for Saudi Arabia, the Kingdom is waging the first war in its history. Yet with its small, weak and inexperienced army, it cannot commit ground troops to fight both the Shiite Houthis or the Sunni Jihadists, and is relying mainly on its air power that has, thus far, caused the death of many innocent civilians.

It also is blockading ports to prevent Iranian resupply of Yemeni clients.

The Saudi-led coalition that’s fighting against Shiite rebels in Yemen said it completed a blockade of the country’s ports and is ready to step up airstrikes.
Bombing missions are seeking to stop the Shiite Houthis from moving forces between Yemen’s cities, Ahmed Asseri, a Saudi military officer, told reporters in Riyadh on Monday. Coalition aircraft and warships targeted the rebels as they advanced toward Aden, the southern port that’s the last stronghold of Saudi Arabia’s ally in Yemen, President Abdurabuh Mansur Hadi. Shipping routes to and from the ports are under the coalition’s control, Asseri said.

The Egyptians are planning to help in Yemen. Even though Nasser’s campaign in Yeman was a disaster, that was in 1962 and run by Nasser, an incompetent.

Egypt said Thursday that it was prepared to send troops into Yemen as part of a Saudi-led campaign against the Iranian-backed Houthi movement, signaling the possibility of a protracted ground war on the tip of the Arabian Peninsula.

A day after Saudi Arabia and a coalition of nine other states began hammering the Houthis with airstrikes and blockading the Yemeni coast, President Abdel Fattah el-Sisi of Egypt said in a statement that the country’s navy and air force would join the campaign. The Egyptian Army, the largest in the Arab world, was ready to send ground troops “if necessary,” Mr. Sisi said.

The Pakistanis have not yet committed to the fight. Meanwhile, Assad is looking vulnerable.

A surge of rebel gains in Syria is overturning long-held assumptions about the durability of President Bashar al-Assad’s regime, which now appears in greater peril than at any time in the past three years.

The capture Saturday of the town of Jisr al-Shughour in northern Idlib province was just the latest in a string of battlefield victories by rebel forces, which have made significant advances in both the north and the south of the country.

As was the case in the capital of Idlib province last month, government defenses in Jisr al-Shughour crumbled after just a few days of fighting, pointing as much to the growing weakness of regime forces as the revival of the opposition.

Iran may just have more on its plate than it can handle. Obama is promising to end the sanctions which have harmed the country’s economy and , perhaps, its ability to service its clients. For example, Iran has been resupplying Hamas after the Israeli incursion.

On July 14, Iran’s Supreme Leader Ayatollah Ali Khamenei praised his country’s “appropriate stands” against the “Zionist regime” during the Gaza conflict. A confidential June report by the UN Security Council’s Panel of Experts on Iran noted that an Iranian ship detained by the Israel Defense Forces on March 4 contained M-302 rockets and fuses, along with other arms.

Now, it seems, Iran is helping rebuild the Hamas tunnels in Gaza.

Iran has sent tens of millions of dollars to Hamas to help rebuild the Gaza tunnels destroyed by Israel during last summer’s conflict, the Telegraph reported.

Iran has sponsored Hamas’ military operations for years, according to the newspaper.

The emergence of Israel as a Mediterranean energy player comes as a new driver of this momentous regional strategic change. The Tamar and the Leviathan gas fields are developed at the very moment when the energy relations between the Middle East countries, and those of the North of the Mediterranean Sea, especially Turkey, Greece, as well as the European Union are shifting.

This shift in the relations of Israel with its political environment follows three distinct axes: the energy and strategic cooperation with Egypt and Jordan, the discussions with Cyprus and Greece, and the multifaceted relationship with the Russian energy strategy, which involves Turkey.

The implications of this development are profound. New alliances may be forming.

Over a very short time span of barely four years, from the discovery of the Tamar and the Leviathan field to today, Israel has moved from the status of “protected” power to the status of an emerging energy power. This is a transformation of its importance, of its role and of its inherent power.

We must not forget that with power comes status (Norbert Elias, The civilizing process, vol.II, State formation and civilization, 1982). In the case of Israel, this new “new status” as an energy power comes with a strange kind of Middle East “normality”: as other Middle East powers, as Saudi Arabia, Iran, Turkey, it is now an exporter of energy; as Saudi Arabia, it is supporting Egypt and Jordan, while being wary of Assad’s Syria, as well as of the expansion of the Islamic State and of the strategic projects of Iran, and it works at being more independent from the U.S.

For example, there’s Israel’s annual $100 million trade with Egypt, the result of an economic deal worked out in 2004 between Israel, Egypt, and the US.

“Our QIZ agreement with Egypt keeps getting stronger,” said Cohen, referring to the Qualifying Industrial Zone. “It was strong under the Mubarak administration, but surprisingly got even stronger when Mohammed Morsi took over the leadership of Egypt in 2012 – and now, with Abdel el-Sissi leading the country, it continues to flourish.”

There were concerns among Israeli officials that Morsi, former head of the Muslim Brotherhood – the “parent” of Hamas – would attempt to undo the 1979 Israel-Egypt peace treaty. But, at least on trade issues, the opposite took place. Now, said Cohen, with Sissi helming the government in Cairo, trade with Israel is stronger than ever.

Iran may be reaching the limits of its strength in the middle east. If it loses Assad, it will lose Hezbollah in Lebanon.

“We’re seeing a game changer right now in Syria,” said Jamal Khashoggi, a prominent Saudi journalist. “I think we are going to see an end to the Assad regime, and we have to think now about what will happen the day after, because the day after is near.

Obama may be too late to save the Ayatollah. Meanwhile, Egypt looks to be considering a move into Libya to capture the eastern oil fields. This is a very logical move since Libya is an Italian creation of the last century. The oil fields are divided between the two ends of the country. 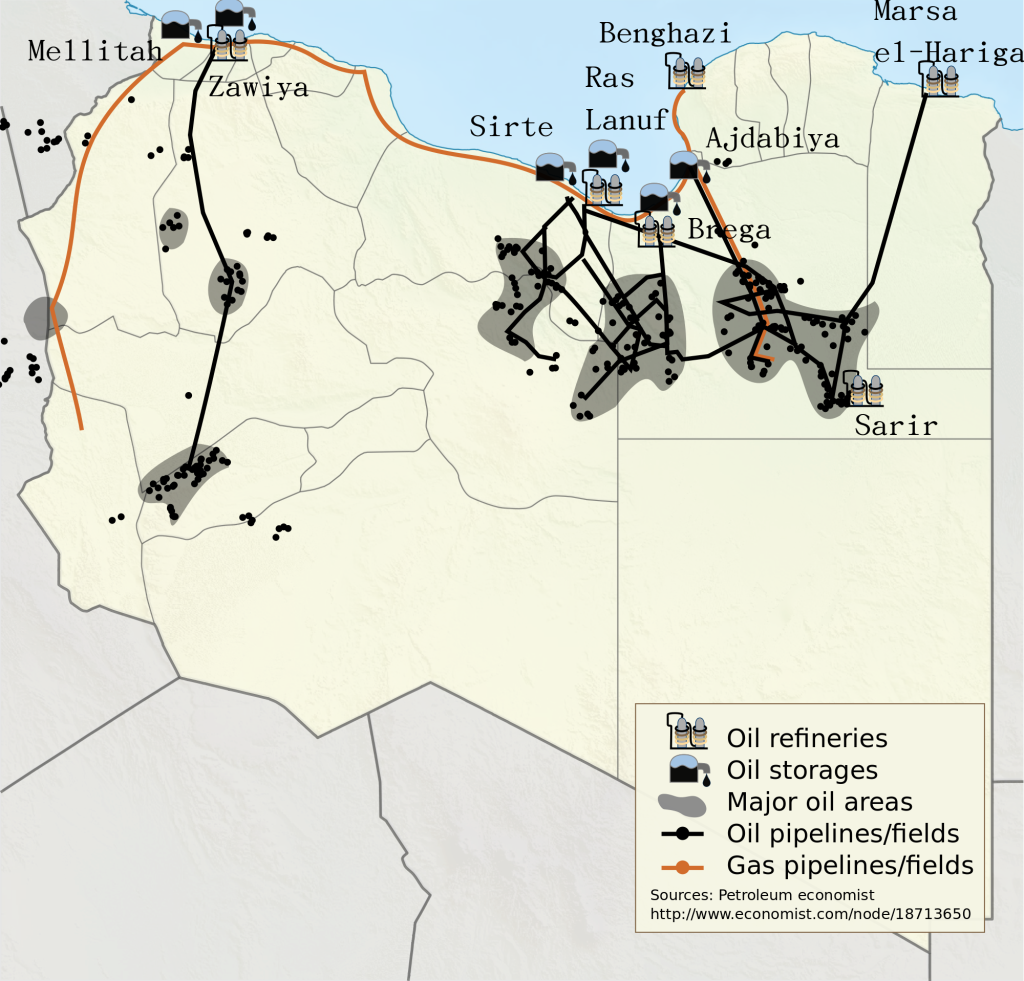 The eastern fields appear to be the largest and are close to Egypt. The anarchy in Libya gives Egypt an excellent opportunity to get its own oil.

Egypt’s projected invasion of Libya was high on the agenda of American CIA Director John Brennan’s unannounced visit to Cairo on April 19 for a meeting with the president.
In reply to his visitor’s demand for precise information on Egypt’s Libyan campaign. President El-Sisi offered an assurance that he had no intention of keeping the Egyptian army in Libya. He would pull the troops out after defeating and disarming the jihadis and hand power to the Libyan government, which has established its seat in the eastern town of Tobruk near the Egyptian border and home to Libyan military bases and oil terminals.
The Tobruk government was set up by Libyan members of parliament who fled the capital Tripoli when it was overrun by a group of extremist Islamist militias, known as the Libyan Dawn, which included elements associated with Al Qaeda in the Islamic Maghreb – AQIM.
The head of the this government is Abdullah al-Thinni, who is recognized by the United States and most Western governments as the legitimate prime minister of Libya.

Perhaps an agreement might be arranged. Protection for oil.

The other factor that is a threat to Iran is that ISIS is really a Sunni insurgency that, while destructive and destabilizing, is also Iran’s worst enemy. It is being directed by Iraqi Sunni generals who were excluded from the Maliki run state under Iranian pressure. Iran may have more than it can handle here.

9 thoughts on “Is Iran risking a Vietnam-style Quagmire ?”