And some things which should not have been forgotten….
Have not been, because they are either funny or excellent cautionary tales. The Teflon Man, for instance: he bestrode the small world of military broadcasting, providing a rich legacy of horrible gaffes, cringe-inducing miscalculations and antics which reflected no credit whatever upon the unit to which he was attached. Spend more than a couple of years as an NCO in military broadcasting, and you will know everyone, or know of everyone, and the Teflon Man was a legend, like Bigfoot or Elvis, because nothing ever seemed to stick. He had more lives than Wylie Coyote, bouncing back time and time again from incidents that would have seen any other military broadcaster sent back to civilian life, working the overnight TV board shift for the last-rated station in Sheboygan or Bakersfield.

I was swapping gossip with one of the TV reporters at AFKN-Seoul when the Teflon Man’s name came up, and the reporter said, “Yeah, he was interviewing the Social Actions Officer one day, she was a major and a real good-looking woman, and with the camera rolling, he said ‘Major, I’ll bet you could suck the windsock right off this microphone!”
“Ouch,” I winced. “He was at FEN-Tokyo when I was on my first tour at Misawa. Remember, Tokyo used to do a live five-minute network newscast at the top of every hour? We could count on him to mangle at least two words per story. When Pope John died, you should have heard him try and tackle “papal encyclical” and “ecclesiastical”. And then there was the thing with the Russian MIG…”
“Never heard that one, must have been before my time.”
“Our Program Director told us…. and later on, I worked with the guy who was the news director in Tokyo at the time. He said he still broke out in a cold sweat, thinking about how close it came to being an international incident.”

Overseas, more than Americans listen to AFRTS; it must be some kind of guilty pleasure, like Baywatch and Big Mac Quarter-pounders. Our FEN-Misawa afternoon DJ, Dickie the Crazy Marine, claimed that during an epidemic of what was termed the ‘Russian flu’ he once asked all his listeners to face east and cough. Supposedly, the Russian embassy demanded an apology, reminding everyone that we had a considerable shadow audience out there.

A Russian MIG had buzzed an American aircraft carrier at an uncomfortably close distance, and the Cold War was still current enough that this made the newswires as a three or four line item. Teflon Man pulled that story off the teletype as part of his top-of-the-hour newscast. On his way into the studio, he stopped at the News Director’s desk and asked how to spell “strafed.” The News Director, busy with another project, spelled the word for him. Teflon Man took his news copy and went into the studio to practice, and the News Director went back to his own project… until he was stricken with a sudden, certain, cold-sweat inducing conviction at a minute or so into the live newscast. He sprang up and ignoring the lit “on-air” warning light, ran into the studio and grabbed the news copy out of Teflon Man’s hands.

Years later, that News Director told me he about had a heart attack, looking at that news copy and realizing how close Teflon Man came to announcing on AFRTS live network news—which had an audience all over Japan and the Kanto Plain — that a Russian MIG had strafed an American aircraft carrier.

Afterwards, as the News Director and the Program Director took turns chewing large chunks off the Teflon Man, he looked at them blankly and said,
“Strafed… buzzed? What’s the big difference?”

They eventually made him an instructor, but that is another story.

This and other amusing reminiscences of my Air Force time are in an e-book collection – Air Force Daze, available on Kindle. 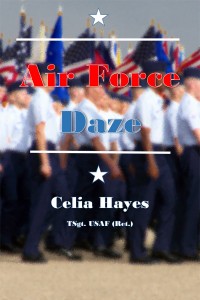