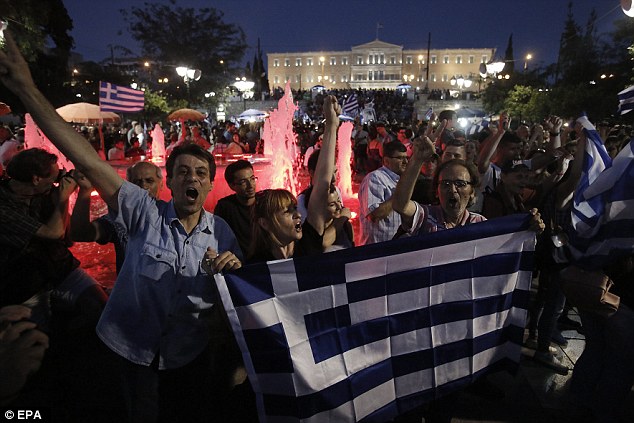 I’ve been planning trip to Greece for months. Back in January, I decided to wait until the Greek monetary crisis was closer to resolution. Finally in May, I made reservations for September. I even posted my plans here.

Well, today it may be all going glimmering. The Greeks have apparently voted NO to the EU deal.

With most of the votes counted in a referendum that will shape the future of the continent, the ‘No’ campaign has a staggering 61 per cent of the vote – 22 points ahead.
German Chancellor Angela Merkel and French President Francois Hollande called for an EU crisis summit to find a ‘solution’ for Greece, with leaders set to meet in Brussels on Tuesday.
Thousands of anti-austerity voters took to the streets in celebration as the leader of the pro-EU ‘Yes’ campaign resigned, with an official announcement of the final result imminent.
But German politicians warned of ‘disaster’ as they accused Greek Prime Minister Alexis Tsipras of ‘tearing down bridges’ between Greece and Europe.

Our reservations are not until September but this is probably going to blow up the trip.

The Wall Street Journal is not happy.

Mr. Tsipras might soon find it difficult to deliver on his promise to secure a more lenient bailout deal from Europe, where other governments, led by Germany, are in no mood to offer Greece more generous terms.

The country’s government faces a race to secure financing before a major bond held by the European Central Bank falls due on July 20. Default could precipitate an escalation of Greece’s already severe financial and economic paralysis.

Personally, I think the Greeks are better off out of the EU. The IMF terms were the usual combination of austerity and high taxes. Greece can’t collect the taxes it tries to levy now. Tax evasion is close to 50%. The population is in rebellion. The reaction is divided along economic lines.

“Any person who is able to think for themselves will vote ‘no.’ I did,” said Anna Stavrouli, a 46-year-old public-sector employee after casting her vote in the working-class Athens neighborhood of Dafni. “It is time to stand up and defend ourselves.”

“My vote was a loud ‘yes,’ ” said 33-year-old graphic designer Georgia Hatzisava. “I have worked hard to build up a business and now it could collapse.”

How would Greece survive out of the Euro zone ? Maybe this is a suggestion.

Greece might be able to cling on to the euro even amid this horror scenario. It could issue IOUs — effectively a parallel currency to the euro — to pay wages and other domestic commitments, allowing the government to use scarce euros to meets its international interest payments.

These “I Owe You” notes have been used in the past to help governments get over a temporary shortage of cash, for example by California in 2009.

But at some point, those notes would need to be converted to cash — and that’s when Athens may have to abandon the euro and print its own money.

Analysts at Moody’s say Greece would only drop the euro and issue its own currency if there was absolutely no other alternative.

It is likely the new currency would quickly lose its value. While that would be painful at first, it could eventually help Greece back on its feet. A cheaper currency would make Greece more competitive and attractive for investors and tourists.

They would probably have to go back to the Drachma, the pre-Euro currency. It would be inflated but the Greeks might be able to survive on tourism and olive oil, about their only two products. Greek medicine is pretty good and they are pretty far east. Maybe medical tourism might help.

In Thessaloniki, Greece’s second-biggest city, full cafes and tourists braving the heat gave the impression of a normal Sunday. But that was belied by the long queues at ATMs and at schools where polling stations were operating throughout the day.

“I voted ‘yes’ because I want to be in Europe,” said veterinarian Athina Konduri, as she left a polling station in a graffiti-covered school. “If ‘no’ wins I am afraid the crisis will deepen. We will go back to the drachma and that is a very bad idea.”

Thessaloniki is on our itinerary but the trip is very shaky right now. And does Greece have something to teach us ?

Some people think so.

Our government is far smaller than Greece’s today. Federal spending is just 20.5% of GDP. But, according to the Congressional Budget Office’s alternative fiscal scenario, that could rise to almost 34% by mid-century. Factoring in state and local government spending, which already accounts for roughly 14.4% of GDP, total government expenditure in the US could reach 48% to 50% in 2050, roughly Greek levels.
As government grows, the private sector contracts. Greece has one of the most inhospitable business climates in Europe, ranking 84th in the world in the most recent Economic Freedom of the World Index. Meanwhile, as the United States continues to increase taxes and regulations, we have fallen from the second highest economic freedom ranking just 15 years ago to 12th place.

32 thoughts on “Greece is going aglimmering.”