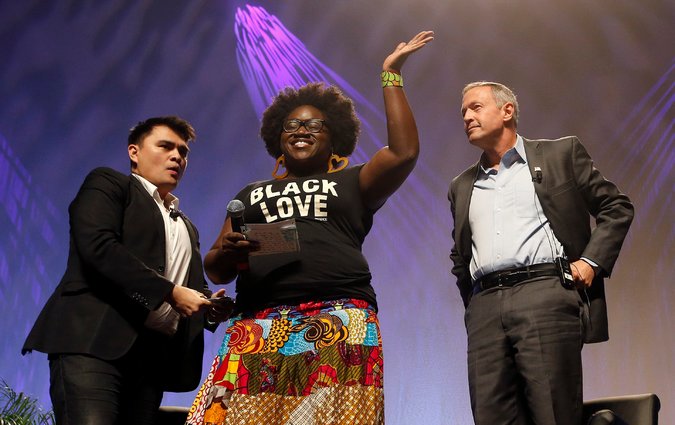 At the “Netroots Nation Conference, while an illegal alien was interviewing Martin O’Malley, a Democrat candidate for president, the stage was invaded by a black convicted felon (embezzlement) named Tia Oso who protested when O’Malley said “All lives matter.”

Chanting, “What side are you on, my people, what side are you on?” and “Black lives matter,” the demonstrators moved to the front of the ballroom about 20 minutes into the event as Mr. O’Malley discussed proposed changes to Social Security. They remained there, heckling the candidates and posing questions, until organizers shut down the event, one of the centerpieces of the annual Netroots Nation conference.

The Democrats are going to have serious problems with the black activist movement.

The black radicals even plan to dig up the remains of General Nathan Bedford Forrest and his wife, law or no law. This sort of lunatic behavior is going to discredit this stuff pretty soon.

Of course the Connecticut Democrat State Central Committee voted to remove the names Jefferson and Jackson from their annual celebration, so the black radicals not that much more crazy.

Connecticut state Democrats voted Wednesday to remove the names of former presidents Thomas Jefferson and Andrew Jackson from their annual fundraising dinner, reportedly because of their ties to slavery.

According to the Hartford Courant, it only took two minutes for the Connecticut Democrat State Central Committee to unanimously pass a resolution stripping both names from the title of the Jefferson-Jackson-Bailey Dinner.

Party Chairman Nick Balletto proposed the change. He told the Daily Caller the decision, which apparently came under pressure from the NAACP, was about party identity.

Richard Fernandez, as usual, has good insight into what this means.

The rich white guys want gay marriage, environmental zoning, immigration, crony capitalism and arugula. Trouble is, if you give these things to the white liberals, it will starve and disgust the black base. The conflict is illustrated in the a quote cited the Washington Post article.

“We’re going to transform the economics in America so that we create millions of decent-paying jobs,” said Sanders in the clip. “We’re going to make tuition at public colleges free.”

The Big Tent was collection of naturally antipathetic interest groups held together by the prospect of other people’s money.

The Democrats are playing a zero sum game. “Eventually you run out of other people’s money.”

However, the Republicans may face a somewhat similar revolt over a plan by the Chamber of Commerce to go after conservatives, in primaries over their opposition to some Chamber priorities.

“The fact that there are still members of the Republican House that are obstructionist, isolationists that would be willing to shut down the government only reinforces that the Chamber and the business community, for that matter, will double down on this winning formula,” Caldeira said. “I believe they are going to continue to be involved early in candidate recruitment to find candidates that have the willingness to run, the courage to govern once they get to D.C., and hopefully work in a bipartisan manner to get things done.”

Cruz let McConnell have it with both barrels.

McConnell lied to the entire Republican conference. Cruz’s speech stemmed from how McConnell—despite telling the entire GOP conference there was no such secret deal with the Democrats during the Obamatrade process to later bring up Ex-Im reauthorization—actually did cut a deal with Democrats, specifically Sen. Patty Murray (D-WA)

Read the code between the words. “We will support Democrats to get what we want.” What do they want ?

Maybe unlimited immigration ? They got the ex-im bank reauthorization. Now what ?

For decades its leadership could talk conservative and vote Democrat. Now it’s time to fish or cut bait. Politicians who could formerly sit on the fence are finding it transformed into a 12 foot slide made of razor blades, otherwise known as Donald Trump, who has now taken to wearing white golf shoes and a matching baseball cap on the campaign trail.

Liberal politics is like a robot that’s blown a fuse. President Obama illustrated the liberal bipolar disorder by exhorting Kenya to shift to solar power, almost as if his Democrat white half were reflexively talking to his black half.

Milo Yiannopolulos of Breitbart argues that the coming years will see everyone set against everyone else and attributes it to identity politics being carried to is logical conclusion.

Since the 1970s, social psychologists have been aware that emphasising differences between groups leads to mistrust and hostility. In a series of landmark experiments, the psychologist Henri Tajfel found that even wearing different-coloured shirts was enough for groups to begin displaying signs of mistrust.

So guess what happens when you tell everyone that their worth, their ability, their right to speak on certain subjects and – shudder – their “privilege” is based on what they were born with, rather than any choices they’ve made or who they are?

Republicans have to deal with the “Donor Class” who want unlimited immigration and crony capitalism (also known as fascism). Democrats have to buy off two competing interest groups as the country goes broke.