I recently received a letter from Tony Parker which is excerpted below:

Chairman Priebus has written to you several times this year asking you to renew your Republican National Committee membership for 2012  As the Treasurer of the RNC, I’m concerned that we haven’t heard back from you…I know other things come up, and perhaps you’ve just been delayed in renewing your membership.  If that’s the case I understand….I hope you haven’t deserted our Party.

Oh, no, Tony, I haven’t forgotten.  I’ve made substantial political contributions in the past, and will continue to do so in the future.  But at present, I believe the highest leverage can be obtained by contributing directly to campaigns I like, rather than to the RNC or the various umbrella campaign organizations.

For one thing, I’m not very impressed with the way the Republican leadership has chosen to conduct itself, which seems more oriented toward ensuring long-term employment (followed by comfortable retirement) for members of the Republican side of the political class, than it does with pursuing the needed political change.  But in addition,  I am extremely unimpressed by your political marketing skills, particularly those having to do with the ever-more-critical Internet arena.

Please review my post at the Chicago Boyz blog, for some thoughts on this:

Something is happening here, but you don’t know what it is…do you, Mr Priebus?

You are failing at social media, not using it effectively either offensively or defensively.  For example, this morning the following image was being circulated on Facebook: 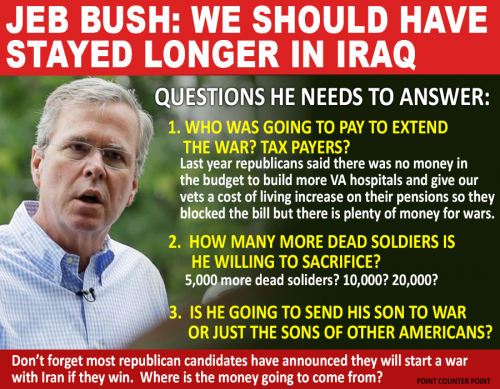 Note the assertion that the problems with medical services for veterans are to be laid at the door of the Republican Party.  A competent political marketing organization would monitor for things like this and make a hard-hitting response post available for sharing immediately.  You don’t seem to be able to do this, or even to see the need for it.

You’re not very good at traditional direct-mail marketing, either.  Most of the very high volume of mail I get from you is so bad it’s embarrassing.  Your DM people seem to think that we are living in the ’50s….not the real ’50s, but some highly stereotypical version thereof:

“Maw!  Maw!  We got us a letter from these political people up in Washington DC…and it must be REAL important!  It has this really long number on it, and it says we HAVE to answer it!”

Most people who have enough money to make significant political contributions have at least some degree of astuteness, and are not likely to respond well to this sort of thing.

The verbal communication of the senior Republican leadership is also generally pretty terrible.  There is too much talking like a Martian, as Thomas Sowell has pointed out:

When the government was shut down during the Clinton administration, Republican leaders who went on television to tell their side of the story talked about “OMB numbers” versus “CBO numbers” — as if most people beyond the Beltway knew what these abbreviations meant or why the statistics in question were relevant to the shutdown. Why talk to them in Beltway-speak?

You might think that the stakes are high enough for Republicans to put in some serious time trying to clarify their message. As the great economist Alfred Marshall once said, facts do not speak for themselves. If we are waiting for the Republicans to do the speaking, the country is in big trouble.

Democrats, by contrast, are all talk. They could sell refrigerators to Eskimos before Republicans could sell them blankets.

You…the institutional Republican party…are doing a very poor job at selling and marketing.  The consequences for this country and the world of your failure are likely to be very severe.  I hope that you will solve the problem before it is too late, but history does not lead me to be very optimistic on this front.  Unless and until I see serious evidence of change and improvement, I will be directing my political contributions to individual candidates who appear to “get it,” rather than to the RNC or to the various Republican umbrella campaign organizations.

via: paper mail and electronic mail; posted at the Chicago Boyz blog and the Ricochet blog