Admiral Gary Roughead, Chief of Naval Operations 2007-2011, recently spoke to our organization. A U.S Naval Academy graduate, he was one of only two officers in the US Navy to have commanded both the Atlantic and Pacific fleets. He’s currently on the board of directors of both Northrup Grumman Corp and The Center for a New American Security. He is also a Visiting Fellow at the Hoover Institution. I paraphrase some of his remarks below. 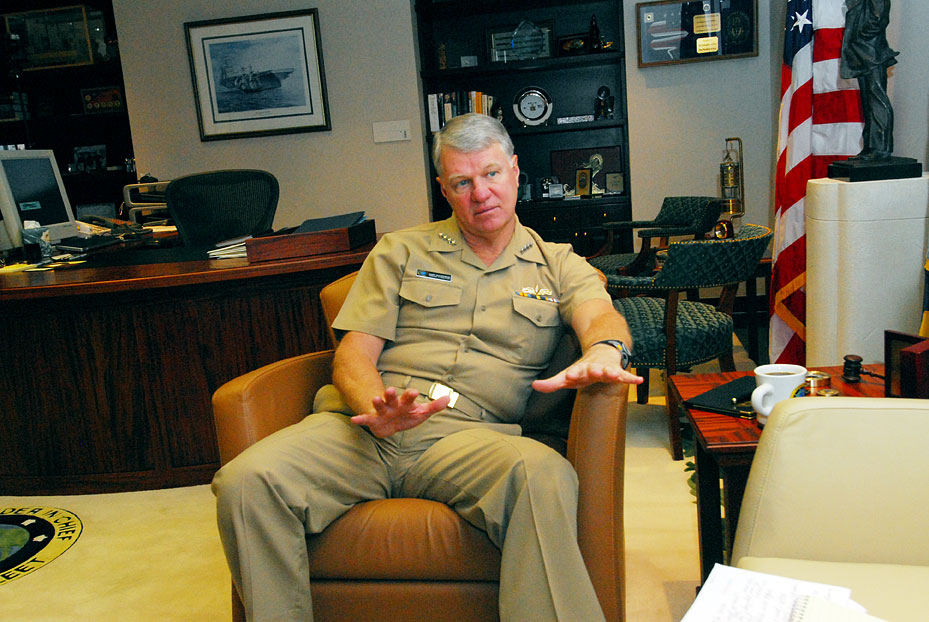 A Wilderness of Disorder

Clearly the old order we grew up with is rapidly disappearing. I use that in the Shakespearean sense, where the wilderness is this multitude, this mass of uncertainty that really surrounds us. That’s the period we’re in. And I do think Europe today, NATO today, epitomizes that. If you look at the structure of NATO it has started to parse into many different groups. If you’re in the East, the threat is Russia. If you’re in the South, it’s North Africa and the Middle East. If you’re in the West, Russia and the Middle East are, well, other people’s problems.

We’re in a time when we place a higher value on ‘The Narrative’ than we do on the substance of a problem. The idea is that if we get the narrative right, we’ve got it right; when in point of fact it is the underlying substance that is important.

A Changing Landscape in Asia

I’m not of a mind that China’s had it’s run and now it’s into a different phase. I think we’re going to see them work very hard with a very centralized approach to weather some of their economic issues. As China looks to the future, it has a strategy that has an economic underpinning and a military underpinning. At its heart is the “Belt and Road” initiative which consists of a Maritime Belt around the Indian Ocean, a Silk Road across Asia, and the Asia Development Bank. It a very interesting strategy that will press China deep into the heart of Asia.

Russia finds itself in a partnership with China that is historically inconsistent. China has been a strategic competitor of Russia, and Russia will soon find itself the junior in that relationship.

The associations and relations we have in Asia are going to be hugely important.

India, Japan and China will be pressing into space in a very big way. We need to think about the business and strategic effects of that.

Asia has found the submarine. We are going to see a proliferation of submarines and unmanned undersea systems there unlike anywhere else.

Our Focus is Too Close

We tend in think in terms of the next budget, what’s in the news, what’s capturing our attention at the moment. We need to spend more time thinking about the patterns of life, about what the drivers are and how they span a generation or perhaps two generations.

We are in a time when actions are more event driven than strategy driven. This is partly driven by the explosion of information availability, people now have instantaneous access to information that was once the purview of the elite. It has shortened the deliberation time leaders have before judgement is delivered from the public domain. It is forcing a compression of events. We need to act less hastily and think more.

Because of this information space we now exist in, we have gotten away from being able to thoughtfully assess whether something is an existential threat, or a vital threat, or perhaps not even a threat. But because of this flood of information, we have now begun to associate violence somewhere with a threat, which is not always the case.

He also touched on many other subjects including: the declining performance of our schools and toll that will take on our entire society, the loss of boundaries between the personal and the public and the corrosive effect that is having on our society, the rise of political and religious extremism, our loss of leadership in nuclear power development, the need to develop directed energy weapons, the increasing importance of unmanned vehicles, and the desperate need we have to develop cyber-warfare and cyber-defense capabilities.

Admiral Roughhead gave me the impression of someone intelligent, thoughtful, and someone aware of the questions that need to be asked but not sure of the answers.