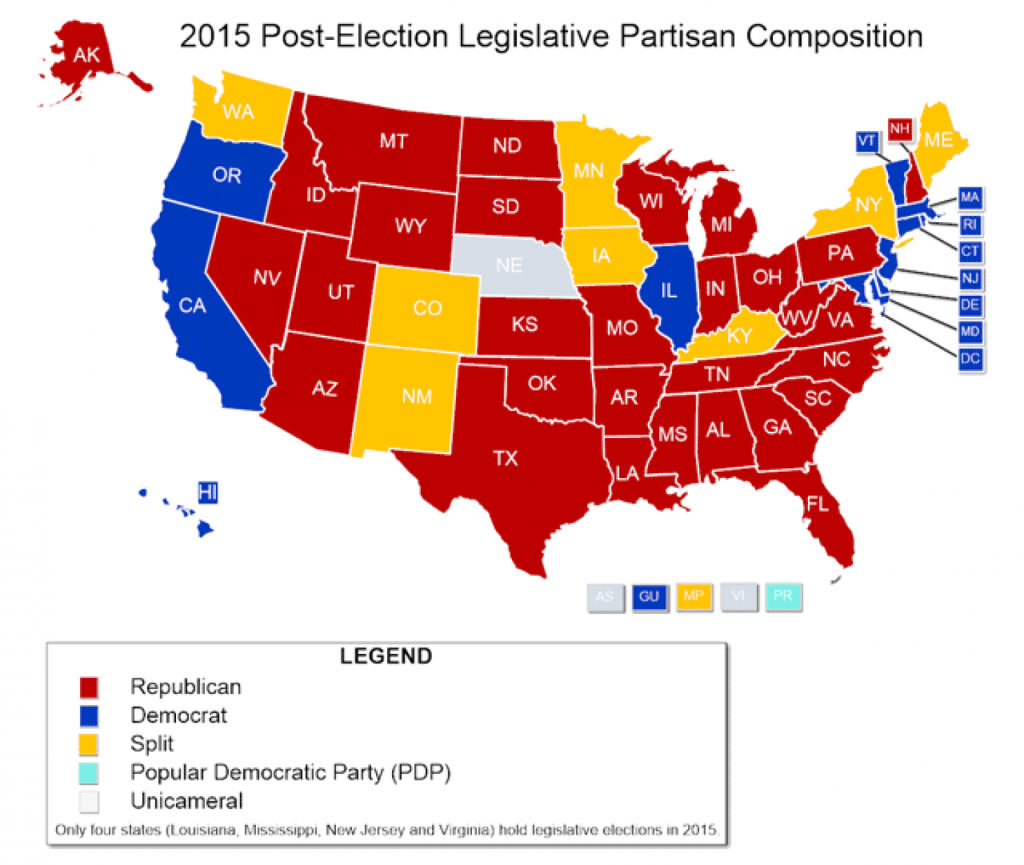 We have now become two nations, divisible, without liberty and justice for all.

As usual, I read another good Belmont Club post.

I get discouraged about the future when I see the stupidity of the youngest generation in college. The left is worried that Republicans hold most state offices. Why has this happened ?

That dominance — and what it means to the policy and political calculations and prospects for both parties at the national level — is the single most overlooked and underappreciated story line of President Obama’s time in office. Since 2009, Republicans have made massive and unprecedented gains at the state level, gains that played a central role in, among other things, handing control of the U.S. House back to the GOP in the 2010 election.

It’s just inexplicable. Why would the country that elected Barack Obama twice choose Republicans for those offices closest to their own lives ?

While the story at the national level suggests a Republican Party that is growing increasingly white, old and out of step with the country on social issues, the narrative at the local level is very different. Republicans are prospering at the state level in ways that suggest that the party’s messaging is far from broken.

There are other, more pragmatic effects of the GOP dominance in governor’s races and state legislatures, too. Aside from giving the party a major leg up in the decennial redrawing of congressional lines, which has led to a Republican House majority not only today but likely through at least 2020, the GOP’s dominance gives the party fertile ground to incubate policy that makes its way to the national level and to cultivate the future stars of the national party from the ground up.

Hmmm. What, while this is developing, is going on at the college level? “Safe Spaces have become a big issue at elite colleges.

Students are demanding that Yale University fire two administrators who failed to speak out against offensive Halloween costumes. This is just one of the grievances of activist students—many of them people of color—who claim Yale is not a safe space for them.

On Thursday, the students surrounded Yale College Dean Jonathan Holloway—a black man—in an outdoor space and chided him for failing to take action against a fraternity that had allegedly prevented black women from attending its party.

Shades of “Black Lives Matter” and at Yale, home of the privileged of all races. Now, at the university of Missouri, black football players threaten to boycott the team !

There is also a movement to create “dormitories for millennials.

“Pure House” is one such business that tries to attract people who want to be a part of a certain type of community—although the apartment rentals often come with expensive, unconventional lease agreements. The community rental company requires that anyone seeking to live in any of its nine fully-furnished residential apartments located in Williamsburg, Brooklyn fill out an application that asks questions such as, “What are your passions?” and “Why do you think you’ll thrive in a communal living space?” The application process is meant to select individuals who are socially similar and have like-minded worldviews. Residents pay $1,600-$4,000 per month after signing a 30-day membership agreement, which includes communal activities and amenities such as work out classes, maid services, and bicycles.

Communitarian living. Just like Hillary advocates. What about children ? Does anyone think these people will have children ? They are children.

What else describes these people ? 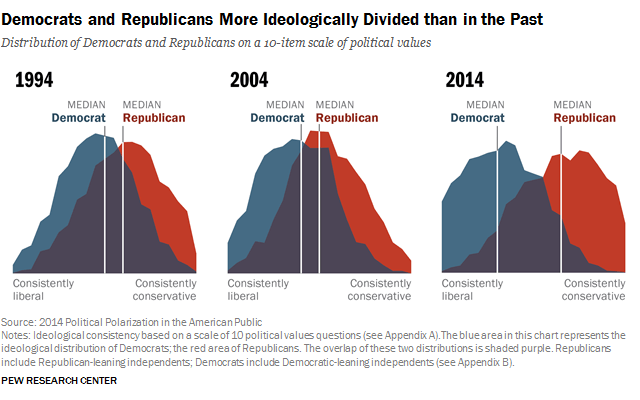 This shows what has been happening to the US over 20 years. Democrats and Republicans no longer agree on much although there was once less difference. What does this mean ? An excellent comment to that story:

Regarding that graphic from Pew Research, here is the set of 10 questions and the methodology they use to determine that “ideological consistency” and “ideological divide”:

Among all the polling they do, Pew has been tracking the answers given to the same 10 questions since 1994. The wording of the 10 questions has had to remain exactly the same in order for the tracking of responses to represent something.

Note question #10 (Q50u): The two statements are posed to represent the conservative and liberal viewpoints, and poll respondents are asked to choose which most closely reflects their own POV:

This was the wording of Question 10 as chosen in 1994. Pew was still asking the question with this wording in 2014, because they had to stick to the wording from twenty years previous.

But does that 1994 wording capture ANY semblance of what the debates were on the issue(s) of homosexuality in 2014?

Ditto question #6 (Q25g) on immigration: No mention of or distinction between legal and illegal immigrants.

“Business owners should be free to decline to provide services for a same-sex wedding if they have a religious or conscientious objection.”

“Business owners should face stiff penalties such as fines for discrimination if they decline to provide services for a same-sex wedding.”

Respondents in 1994: “What are you talking about?”

Census demographers expect the growth rate for non-Hispanic whites to resume rising — slowly — when the economy improves. The number for whites should peak in 2024, when the oldest baby boomers, who are overwhelmingly non-Hispanic whites, are well into their 70s and dying in larger numbers. So high school educated whites have been dying while the economy stagnates ? I winder why that could be so ?

Ms. Case and Mr. Deaton found in health-survey data from the CDC that middle-aged whites have increasingly reported mental-health problems and difficulties dealing with daily life. One in three reported chronic pain between 2011 and 2013.

Those increases in mental-health and musculoskeletal problems may “explain some of the recent otherwise puzzling decrease in labor-force participation in the United States, particularly among women,” the authors said. Participation in the labor force has fallen since 2007, according to the Bureau of Labor Statistics.

Economic stress may play a role in substance abuse by middle-aged white people, according to the study.

Economic stress ? You mean no jobs for burly white men ? Do you mean millions of uneducated illegal aliens to compete for low wage jobs ?

When a 55 year old truck driver, warehousemen, fill-in-the-blank, loses his job, his reemployment chances are slim these days. He may report musculoskeletal problems and claim social security. Those claims have sky rocketed recently as has the number of food stamp recipients.

Losing your work, declining fortunes, a run down neighborhood in a declining town with children who can’t find good jobs-it’s all rather depressing. Some people will go too far with booze and/or drugs, which can be pretty hard on your health.

I think that’s what’s going on here. By the way, inviting all the poor people in the world to move here and maybe compete for unskilled and semi-skilled labor, drives down wages. Neither the Democrats nor the Republicans will defend the interests of these US citizens. I don’t need a “study” to tell me this-I understand the law of supply and demand.

Plus, of course, health insurance is increasingly out of reach for the under 65 group.

The premiums are high and the deductibles are out of reach for most people.

Maybe the white people who are not increasing should move to red states. That may be what is happening. Maybe they are moving, or at least those who will survive.