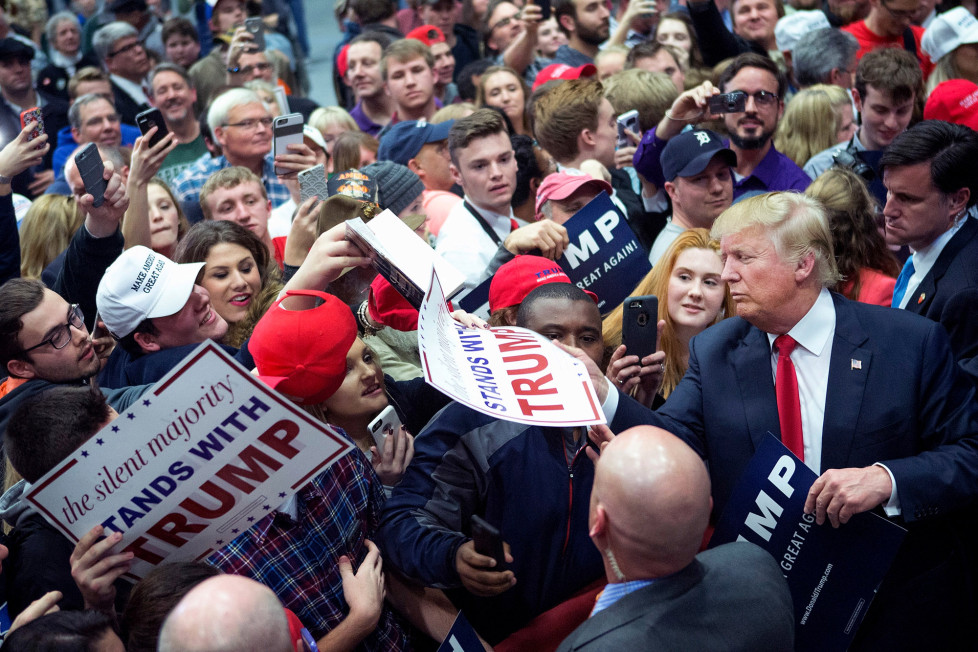 A good column in the NY Post today describes the elites horror at the Trump supporters.

It was quite evident at Meet The Press this morning as the guests expressed suitable horror at Mr Trump’s progress toward the GOP nomination.

Now, after months of whistling past the graveyard of Trump’s seemingly inexorable rise and assuring themselves that his candidacy will collapse as voters come to their senses, a CNN poll released Wednesday showing Trump now lapping the field has the GOP establishment in full meltdown mode. The survey shows Trump with nearly 40% of the primary vote, trailed by Ted Cruz at 18%, Ben Carson and Marco Rubio tied at 10%, and the also-rans (including great GOP hope Jeb Bush) limping along far behind.

I am not a Trump supporter but I am intrigued at the steady progress he is making toward success. I have been a fan of Angelo Codevilla’s characterization of America’s Ruling Class.

The recent collapse of Republican Congressional resistance to the left’s political agenda as noted in the surrender of Paul Ryan to the Democrats in the budget, has aggravated the Republican base and its frustration.

Ryan went on Bill Bennett’s radio show on Tuesday to tell his side of the story, which involves the fact that he inherited from outgoing Speaker John Boehner an unfavorable budget framework, as well as some of the tradeoffs involved (especially defense spending). He also laid out the argument I’ve heard elsewhere, which is that he needed to “clear the decks” so that a real return to “regular order” budgeting next year will be possible. You may or may not be persuaded, but the contrast with Boehner is fairly plain, I think.

In other words, perhaps the omnibus should be thought of as something like the Dunkirk evacuation. But if so, we still need our Churchill to explain it and chart the path forward in a compelling way. This requires the presidential field to step up.

Dunkirk brought the British Expeditionary Force home almost intact, although minus their weapons. Ryan did the equivalent of surrender.

Their panic was best articulated last week in The Daily Beast by GOP consultant Rick Wilson, who wrote that Trump supporters “put the entire conservative movement at risk of being hijacked and destroyed by a bellowing billionaire with poor impulse control and a profoundly superficial understanding of the world .?.?. walking, talking comments sections of the fever swamp sites.”

Some might take that as a backhanded compliment. Can the GOP really be so out of touch with the legions of out-of-work Americans — many of whom don’t show up in the “official” unemployment rate because they’ve given up looking for work in the Obama economy? With the returning military vets frustrated with lawyer-driven, politically correct rules of engagement that have tied their hands in a fight against a mortal enemy? With those who, in the wake of the Paris and San Bernardino massacres by Muslims, reasonably fear an influx of culturally alien “refugees” and “migrants” from the Middle East?

The Daily Beast is not exactly the Republican voter and the “GOP Consultant” seems to be ignoring the possibility that his job prospects might be harmed by his contempt for the voters he is supposed to understand and convince.

All my life, the Republican Party has been my political home. Helping it succeed has been my work for decades. It was never perfect, but families never are.

Flawed, and given to wrong turns from time to time, we had good years and terrible years. We elected presidents, took back Congress after decades, lost it, and took it back again. Our leaders ranged from bad to extraordinary. But through it all, the GOP was the one party even vaguely amenable to limited-government conservatism, to at least some adherence to the Constitution over the social preferences of the moment, and to the constraints on government power that our Founding Fathers so cherished. It was nice while it lasted.

Today the Republican Party has two choices before it: It can either reform itself, or fracture and surrender to the Troll Party.

I think that states it succinctly. I remember a whole segment of the Republican Party that was horrified by the prospect of Ronald Reagan. Maybe Mr Wilson was one or maybe he is too young to remember. Wilson certainly finds an eager audience on the left.

In an interview with MSNBC’s Chris Hayes, Wilson conceded that “Trump is still a very powerful force right now” because he appeals to part of the of the conservative base that Wilson said was activated by his “nativist” message. Wilson insisted that the donor class “can’t just sit back on the sidelines and say, ‘oh well, don’t worry, this will all work itself out.’”
“They’re still going to have to go out and put a bullet in Donald Trump,” Wilson said. “And that’s a fact.”

Who are Mr Wilson’s clients ? Well, he apparently worked for Rick Perry. There was a big success.

Republican pollster Chris Wilson says he personally saw Cain sexually harass a woman at an Arlington, Va., restaurant in the late 1990s. At the time, Wilson was working for the National Restaurant Association, which Cain led.

Wilson is one of three people connected to Perry’s presidential bid with ties to Cain at the trade group.

Among those three is consultant Curt Anderson, whom Cain accused Wednesday of being the leak for a story in Politico.

He doesn’t really sounds like my type of guy. I guess Herman Cain was another of those people who need “a bullet in the head.”

In other words, has the junior wing of the Permanent Bipartisan Fusion Party, ably embodied by Mitch McConnell and Paul Ryan, forsaken even token opposition to the “progressive” ethos? Can it be true that everybody’s fondest wish for Campaign ’16 is the dynastic-restoration battle of Clinton vs. Bush?

Jeb Bush seems to think so, suggesting recently that he might rethink the pledge he signed vowing to support the eventual Republican nominee. To which The Donald characteristically responded: Who cares? “He is a low-energy person, and he does not represent strength, power and stamina, which are qualities our country desperately needs.”

So, JEB is “rethinking” his pledge to support the nominee. Does he prefer Hillary ? I wonder.

In the movie business, there’s something called the “cheer moment,” when the long-suffering hero finally decks his tormentor with a satisfying right cross. What the Beltway Republicans fail to understand is that their conservative base — which gave them stunning congressional victories in 2010 and 2014 and has nothing to show for it — has been longing for precisely that moment since Reagan crushed Mondale 49-1 in 1984.

The “Trumpkins” are sick of winning and having nothing to show for it, and their vengeance will be terrible. Maybe the Establishment should stop belittling them and listen instead.

I am not a Trump voter yet and probably would prefer another candidate like Rubio or Cruz win the nomination. I was a Walker supporter until he dropped out. I would prefer a governor and my ideal candidate would be Mitch Daniels, who unfortunately is unavailable as his family is more important to him.

Trump certainly is making the right enemies and that is a good sign. I’ll wait and see what happens.

48 thoughts on “The Trump Phenomenon.”