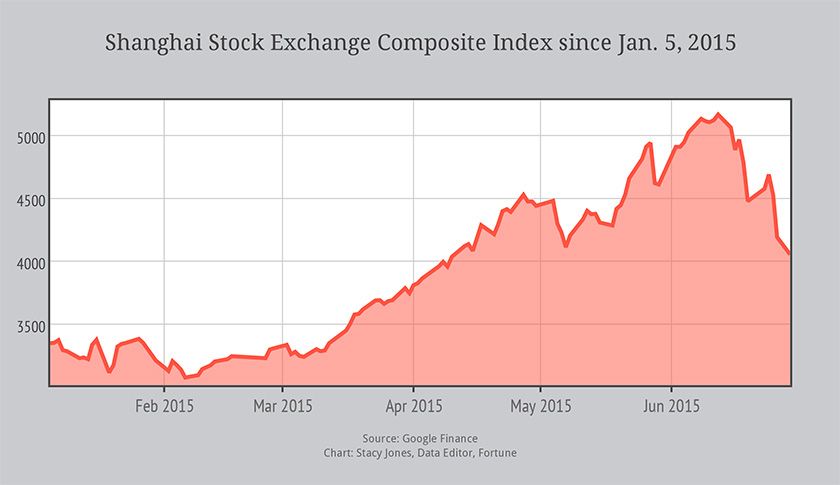 Trump has, famously, gone after China on its trade policy.

In January 2000, President Bill Clinton boldly promised China’s inclusion in the World Trade Organization (WTO) “is a good deal for America. Our products will gain better access to China’s market, and every sector from agriculture, to telecommunications, to automobiles. But China gains no new market access to the United States.” None of what President Clinton promised came true. Since China joined the WTO, Americans have witnessed the closure of more than 50,000 factories and the loss of tens of millions of jobs. It was not a good deal for America then and it’s a bad deal now. It is a typical example of how politicians in Washington have failed our country.

There is an interesting analysis of China’s stumbling economy in the Observer today.

Here is a top ten guide for the perplexed.

Central Planning: Central planning, central planning. The history of the abject failure the Soviet Union’s five-year plans should tell you everything. Command and control economies that report to one man (in a nation of 1.3 billion people) are doomed from the start. Top down economic decisions often look bold and start out highly stimulative, but then degenerate into inefficiency, waste, politics and fraud.

Political Corruption: As the command and control economy generates liquidity, the demand and direction of the distributed capital becomes a political tussle. Decisions on how much steel, cement, coal, glass solar panels, high speed trains and shopping malls—in short everything—are not done in China as a cost benefit analysis by risk capital, a job difficult enough in itself. (Witness the capitalist economies’ booms and busts.) In China, this liquidity was allocated by political muscle, massive bribery and kickbacks, rather than economic justifications.

Basic Gangsterism: Counterfeiting, knockoffs, copyright infringement, theft of intellectual property – these were a part of the booster rockets of China’s economic rise. It was all supposed to go away after China joined the WTO in 2001. It didn’t. It just became more institutionalized. Foreign companies needed Chinese “partners” in auto production, healthcare and technology. These “partners” crippled the potential productivity of the investments and led to frequent disputes and even more corruption… as in the GlaxoSmithKline scandals.

There are a total of nine reasons, many addressed in Trump’s piece above.

Now, the economy of China may be in free fall.

Chinese central bank governor Zhou Xiaochuan has accused “speculative forces” of targeting the country’s currency, the yuan.
He said there was no reason for the yuan to keep depreciating in value and that China would not let international speculators dominate market sentiment.

Another reason quoted by the Observer is something I have previously posted on.

Jack Lew, speaking at the Brookings Institution in July, confidently assured that Americans were immune from weakening markets in China.

“I will say that China’s markets still are pretty much separated from world markets,” the secretary of Treasury, said. “They’re, obviously, moving towards being more integrated, but right now they’re not.”

I guess that statement is “inoperative” right now.

What actually happened is that China’s stock market began as a Potemkin project to assure the world of Beijing’s strength. Chinese investors knew the government would be propping up a mere facade; that the worse China’s economy got, the more the Communist Party would paint the facade. Harlan writes:

Let’s take a moment to state clearly that the stock market and the “real economy,” particularly in China, don’t always dance together. Until 2013, China’s major indexes were among the poorest-performing — which made almost as little sense as what happened next.

China is not a “transparent economy.”

Reckless Gamblers: How did China’s debt-to-GDP ratio go to 240% from 160% in nine years? How are nonperforming bank loans (if honestly tallied) hovering around 20 percent? There is a recklessness in early stage wealth. It happened in England in the 18th century as exemplified by the South Sea’s fraud and a hundred frauds like it. The recent Sino-Soviet forest stock fraud is an exact mirror. Rapid wealth produces intoxicated investors prone to scams. Remember how the Earl of Grantham in Downton Abby invested a fortune in a fraudulent American railroad. I wonder if there is a Chinese translation of Trollope’s “The Way We Live Now”?

China has a small very rich segment of their people who are giddy with riches. They have been foolish with their investments.

China became a binge investor in absurd countries and silly projects. As if to poke the U.S (its largest single-country trading partner) in the eye, China sidled up to Venezuela of all places. Instead of buying oil on the open market, they went deep into infrastructure projects, loans and even endorsed the psychotic foreign policy rantings of Hugo Chavez. No rational government, unless intoxicated by its economic prowess, would do that. The China Syndrome was also applied to Sudan, Zambia, Angola and Nigeria. Look at the bankrupt failed resort in the Bahamas, Baha Mar, if you want to see what “binge capital” looks like.

Trump may be correct but it may not matter.

5 thoughts on “Trump and China”