Recently I became “Carl from Portland” with a move from living in downtown Chicago to the West Coast. It has taken me a while to get settled but I wanted to say hello to my friends at Chicago Boyz.

Originally I started taking pictures of all the weird people I saw in Portland – guys wearing kilts or fishnets, girls dressed up like bumblebees with ukuleles, and all manner of tattoos, nose rings and piercings. But then I realized – hey – that’s like taking a picture of a drunk, fat guy at a Bears game. Unless you can go beyond the obvious, don’t do it at all. Or maybe that is grist for a future post.

First the highlights – Portland has an incredible location. Not only does the city offer everything you’d expect in a big city (restaurants, concerts, cool stores, ability to walk around, nightlife) – they have little to no crime (when compared to ChiRaq) – but you can go about an hour and a half and be on the Pacific Ocean, or about an hour and a half the other way and be hiking in real mountains. Here is a photo I took at Cannon Beach when I went there early in April for an unseasonably warm and beautiful day (I’m told). Below is a photo of Mount Hood from a recent hike we took last weekend. 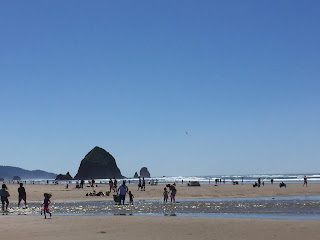 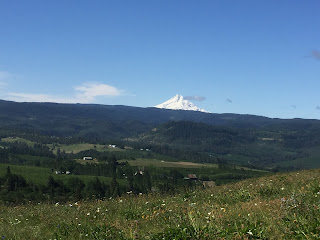 There are some items about Portland that are quite odd to an outsider. One really cool item for me personally is that the cars here do not rust – it is because they don’t use rock salt on the roads here. Thus you see cars in pristine conditions like this Datsun 280Z which would just be a dead hunk in a junkyard pretty much anywhere else (this car is from the late 1970’s I believe). 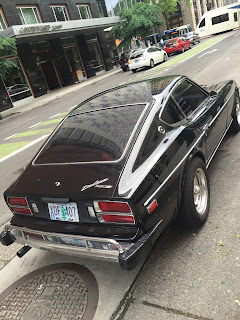 They don’t let you pump your own gas in Oregon. I have been pumping gas my whole life but apparently that is off limits now. This is clearly a “make work” project because the gas pump employees are useless; they don’t clean off your windshield or anything – they just take your credit card, slide it in the pump, put the nozzle in, and usually walk to the next guy. Also when you go to a more remote location (a country store), you need to go inside and wait in line and then the person comes outside and pumps and then gives you a bill. Oh well. 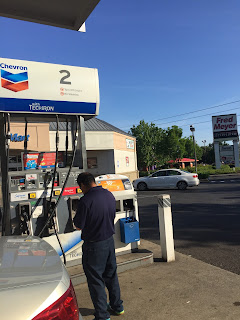 While I don’t have any problem with it personally, pot is basically legal for all intents and purposes and a large number of folks on the street reek of it. Thus I find the sign at Target to be quite ironic. 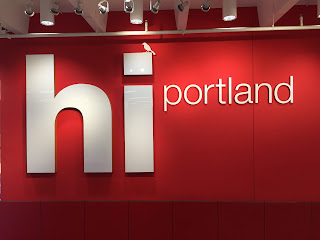 Portland, like Chicago, has a number of great bridges of various designs spanning the many rivers that cross the city. Here is Tilikum Crossing Bridge, which is a pedestrian (and train) only bridge that I walked across this week and it was very beautiful. I walked back across a different bridge. The city is very pedestrian and bike friendly. 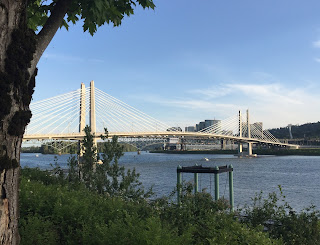 12 thoughts on “Carl in Portland”