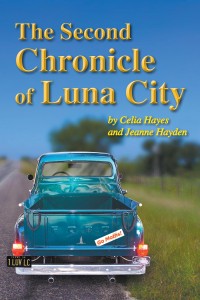 The Chronicles of Luna City proved to be so popular and my daughter and I had so many ideas for further plot developments, that it was only a small chore to produce a sequel, involving the search for a trove of gold coins and ingots supposedly hidden somewhere on Mills Farm by the reprobate bootlegger Old Charley Mills a hundred years ago, and a movie being shot on location around Luna City, which might very well be not all that it seemed when the project was pitched to the residents of Luna City. The Second Chronicle of Luna City is now up on Amazon and Barnes and Noble in Kindle and Nook ebook versions, and will be available by next week in print. (It’s also available direct from us, through the Luna City website.

Below the fold – a sample chapter for your Friday diversion.

Things That Go Bump in the Night

It gratified Richard no end, to discover that there were a number of weeks – months, even – during which it was possible to be comfortable in the little Airstream without running the air conditioning or heating. It seemed at first, that Texas had only two temperature settings; Broil/Roast and Blazingly Hot. To someone accustomed to the fairly mild summers of Northern Europe, alternated with the occasional frigid winter blast, it had all come very much as a shock, especially when such extremes could sometimes be experienced within a single day. However, once he discovered that autumn, winter, and spring were very much like an English summer, he was prepared to be more philosophical about it. The only bad thing about leaving the windows of the Airstream open at night, for the fresh air was the occasional scream of a pea-fowl who preferred to roost in a nearby tree, (until he took steps to discourage the blasted creature), the distant crowing of the Grant’s half a dozen roosters, and now and again something that sounded like a dog suffering from fits of nervous laughter.

“Coyote,” Sefton Grant explained to him, the morning that Richard first mentioned this. Sefton, who was lean and stringy and looked like a slightly younger, fitter and less run-to-seed Willie Nelson, was putting out morning feed for the goats, clad in his usual working attire of battered cowboy boots, a pair of baggy cut-off jeans and a wide-brimmed ‘boonie’ hat which had once been military green but was now weathered to no particular color at all, and nothing much else besides. “Yeah, there’re are coyotes all over in the brush. You won’t see them in the daytime, though.”
“Do they present any danger?” Richard asked, nervously – since he had coyotes and wolves rather muddled in his own mind.
“Only if you are a housecat, or a chicken,” Sefton replied, grinning. “That’s why we lock up them both at night, and give the dogs free run. Judikens says that the coyotes gotta live, too … but not on our damned chickens.”
The dogs – a couple of houndish-looking mutts and one which looked rather like a standard poodle – were usually to be found lazing in any convenient patch of sunshine in the Grant’s yurt-centered compound, where they had all found a happy refuge. Richard didn’t think any of the three were energetic enough to be effective guard dogs, but you never knew. The Grants hadn’t selected the dogs for particular guarding-skills in any case; it was more a case of the dogs – all strays or cruelly dumped in the countryside by irresponsible owners – selecting the Grants as their chosen humans.
“The goats now,” Sefton added, with some satisfaction. “They look after each other. Don’t worry about anything you hear at night, Richard – the dogs are on guard.”
This conversation was the first thing to come to Richard’s mind – actually the second thing, after, “What the hell was that?” – when something woke him in the middle of the night. Something; he sat up in the dark, trying to recollect what it was, or might be. Yes, a sudden kind of ‘whumping’ noise, as of something heavy hitting the ground. Without turning on any of the interior lights, he slid out of bed and padded through to the front of the caravan, where the larger windows offered views of the goat pastures, and the lumpy meadow leading down to the river, with the forlorn campground bathhouse and lavatory, standing foursquare with moonlight silvering the white-washed walls and tin roof. The moon drifted, a milk-pale orb, above the tree line at the water’s edge, where mist tangled like shredded gauze among the distant shrubs and stands of rushes. Was there something moving, there among the brush? Something white; Richard was not certain of what, exactly. Could it be Azúcar, the Grant’s infamously bad-tempered pet llama?
He shrugged – likely it was. Well, no matter to him; and Azúcar was big enough and sufficiently aggressive to look after himself very well. Richard would have thought no more about it – and then he recalled what Araceli had said about ghost riders, along the bank of the river at full moon. Nope – didn’t look anything like ghost riders on spectral horses at all.
But something woke him the following night; not the ‘whump!’ noise that he had heard before. This was more like a regular squeaking sound, like a supermarket trolley with a bad wheel. It went on for about fifteen minutes, finally diminishing into silence, and Richard went back to sleep, muzzily thinking to himself that it was someone passing in the street below … only to recall upon waking very early – that there was no street and no ‘below’ from an Airstream caravan parked in a deserted campground. This was curious at the very least. He could not be certain that it wasn’t a dream anyway.
He mentioned it to Araceli, about mid-morning, when the breakfast rush was over.
“I’ve been wakened in the early morning, a couple of times,” he ventured. “The place is usually so quiet that I sleep like a log … but there is something queer going on.”
“Not that,” Araceli said, in much alarm. “Judy and Sefton are nudists… and totally against any kind of exploitation in any form!”
“No, not that,” Richard sighed. “Not the way that it sounded. It’s just … odd. The place is quiet as a tomb, when the old commune or Founder’s Day isn’t in session. But I can’t help thinking that something strange is going on. Two nights in a row, and something waking me up in the wee hours.”
“Not the ghost riders, is it?” Araceli ventured. “That’s a tale told by teenagers to frighten each other or by the abuelitas to frighten disobedient children.”
“The ghost riders?” Richard raised a skeptical eyebrow. “Pull the other one, Araceli my sweet country innocent. Britain is haunted several times over every inch by the ghosts of two thousand years. I doubt that there is a square inch of the place completely un-haunted. Spectral riders, of a mere hundred and fifty years’ provenance? Please.”
“Well, you’re living there, you figure out a way to put up with them,” Araceli replied smartly and then their conversation wandered on, perforce, to more immediate topics.

4 thoughts on “A Friday Book Diversion”