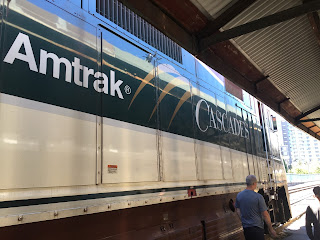 Over many years I’ve commuted on trains for work – the light rail Metra in Chicago in the suburbs and the “L” tracks in the CTA in Chicago. However, I’ve never taken the Amtrak trains so I was excited to take the opportunity to travel between Portland and Seattle and avoid the horrendous traffic that I’ve heard plagues Seattle. Plus, you can have a drink along the way, which is frowned upon nowadays while driving (good for a Friday evening).

You can buy your train ticket online, but you don’t get seats for coach class. When you get to the train station, there is a line that forms before the train departs and you physically stand in the line to get your ticket. At that point they assign you a seat on the train, and if you buy two tickets in the same online purchase, they will plan to seat you together. This is the ticket that they manually wrote out for us coming back from Seattle to Portland on Sunday. 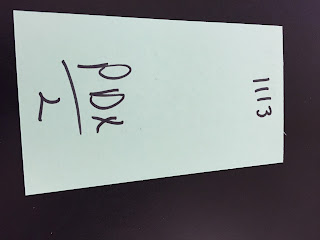 Not very high tech, I’d say. But the experience on the train was fine. You get all kinds of folks on the train, from families with kids to people who look like they can’t afford a plane. The Amtrak personnel were all very friendly and seemed to know what they were doing.

Since I’ve flown for years and years on business and rarely taken a train long distance, I kept thinking I was in an airplane, for instance when I was in the restroom and holding on to the handle in case of turbulence (the train does rock from side to side, especially when you are up top on a two floor passenger car). It also seemed odd not to have your seat belt on. I finally decided that the train was a 2-D airplane.

One thing that you realize immediately on the train is how big the USA is. The train from Seattle to Los Angeles is scheduled to go for over 33 hours (and probably takes longer, since delays are inevitable with all the stops). That would be a long, long time on the train.

Security is also very light on the train – they don’t search you when you board the train and thus boarding is very quick. I assume that this is because there haven’t been terror attacks in the USA yet on the train, so after one inevitably occurs, this will change. I don’t really know how they can police all of these tiny stations in small towns across the country. We will cross that bridge when we come to it, I guess. For now, however, the lack of security and subsequent lines and limitations on what you can carry (you can carry booze / wine for example) is a decent plus for train travel.

I had a good time on the train and was glad that I took it rather than driving to Seattle. However, the stations in Portland and Seattle are unusually nice overall for the Amtrak system (in terms of remodeling as well as location near the city center) I believe and the traffic in Seattle is horrendous, making train travel and driving a relative toss-up in terms of travel time. I also think I would start to go stir crazy on the train after more than 4 hours and thus a longer or overnight trip isn’t too appealing.

13 thoughts on “Amtrak and Train Travel”