Due to the fact that computing power continues to increase exponentially, devices that once were out of reach for the general population are now becoming mainstream. I wrote about Netatmo, a device that measures temperature, humidity and sound (indoor and outdoor) here. Due to the internet, these devices can also be connected together in order to see a real-time version of the country, without having to look at a weather forecast.

Recently I saw an article in an MIT journal about indoor air quality which described how cooking eggs aggravated the authors’ asthma and they were able to take specific actions because they were able to pinpoint the source of the spike in unclear air. The name of the company that created the monitor is called Speck and it was sold for approximately $200 so I thought that was a decent price point for me to join the air quality monitoring revolution. I am specifically most interested in INDOOR air quality but I will explain the broader context and then come back to the specific items I am reviewing (basically you can get official measurements of air quality in the US from public sources). 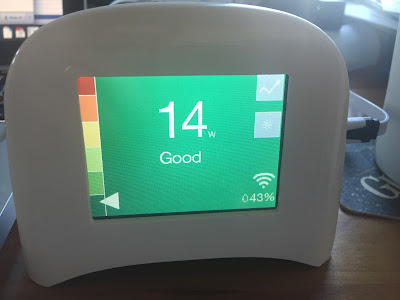 HOW IS AIR QUALITY MEASURED?

For this specific purpose we are focusing on PM 2.5 particles, which are particles that are too fine to be screened out by your nose and throat and as a result they accumulate in your lungs. There are other measures of air quality but these are the specific ones I am focused on (it is a complex topic).

An interesting “Wired” story about air quality is how the release of measurements of the 2.5 particles in China led the government there to acknowledge their air quality problems and start a serious program for monitoring and also to take significant actions (like pulling cars off the road and telling people to stay indoors) when the measurements reach crisis levels.

Measurements for major cities around the world can be found here – this is a site called AQCIN.ORG that picks up only official, calibrated measurement stations (there are many other private stations) and lets you see them for around the world. This site is run out of China which made me suspicious that they were “cooking the books” to make themselves look better but from checking it out a bit it looks legit and also the US numbers seem to be roughly in line with the same numbers I can get from US EPA sources.

The measurement is how much particulate would accumulate in your lungs if you had 24 hours of outdoor exposure; numbers below 50 are good (most of the US falls under this level, with the exception of some areas in a heat wave or where there is a forest fire). In China and India they routinely have numbers above the 300 level where the EPA considers it to be hazardous and the US scale stops measuring at 500 – but China has had 500+ days where they take drastic actions in major cities (such as here where it hit 608).

If the issue was just how to measure outdoor air quality, this is already done for us in the USA through a network of monitoring stations which can be reached through a variety of websites (such as http://www.aqcin.org). This information is readily available.

However, the (potential) issue is that indoor air quality is highly variable, and can be impacted by many variables. On the one hand, if you live somewhere like China, being indoors gives you a significant benefit since outdoor air is so terrible. One of the complaints about the pollution score is that it overstates the negative impact on people in individuals with terrible air if they spend much of their day indoors with air conditioning and filtration systems.

In my experience, when you close the windows and use air conditioning, the indoor air quality improves significantly. We also saw major benefits when we turned on the kitchen fan while cooking. I took the air quality monitor to work, expecting to see poor results because we have a lot of construction occurring, but in fact the work measurements were even better than they are at home. I intend to try again because you get different ratings depending on where you site the monitor and depending on the exact conditions of what is going on.

My Speck experience has been very good. I finally figured out that you “push” the screen with your finger to switch between the “current” air quality (the higher number, a “good” rating would be 500 for instance) rather than the 24 hour number (where “good” is 20 or something like that). You can connect your Speck to the web to see results online or you can hold several days worth of data in the onboard memory and then hook it up directly to your computer to download the data.

I highly recommend buying a Speck if you have people in your family with trouble breathing, live in a polluted area, are undergoing construction, or are just interested in gadgets. At $200 this is definitely worth buying.