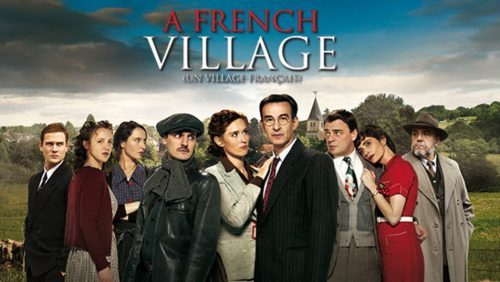 I’ve previously mentioned this series, set in the (fictional) French town of Villeneuve during the years of the German occupation and afterwards.  It is simply outstanding – one of the best television series I have ever seen.  The program ran from 2009-207 on French TV, and all the seasons are now available in the US, with subtitles. Having now watched the whole thing, my very positive opinion of the series is sustained.

Daniel Larcher is a physician who also serves as deputy mayor, a largely honorary position. When the regular mayor disappears after the German invasion, Daniel finds himself mayor for real. His wife Hortense, a selfish and emotionally-shallow woman, is the opposite of helpful to Daniel in his efforts to protect the people of Villaneuve from the worst effects of the occupation while still carrying on his medical practice. Daniel’s immediate superior in his role as mayor is Deputy Prefect Servier, a bureaucrat mainly concerned about his career and about ensuring that everything is done according to proper legal form.

The program is ‘about’ the intersection of ultimate things…the darkest evil, the most stellar heroism….with the ‘dailyness’ of ordinary life, and about the human dilemmas that exist at this intersection. Should Daniel have taken the job of mayor in the first place?…When is it allowable to collaborate with evil, to at least some degree, in the hope of minimizing the damage? Which people will go along, which will resist, which will take advantage? When is violent resistance…for example, the killing by the emerging Resistance of a more or less random German officer…justified, when it will lead to violent retaliation such as the taking and execution of hostages?

Arthur Koestler has written about ‘the tragic and the trivial planes’ of life. As explained by his friend, the writer and fighter pilot Richard Hillary:

“K has a theory for this. He believes there are two planes of existence which he calls vie tragique and vie triviale. Usually we move on the trivial plane, but occasionally in moments of elation or danger, we find ourselves transferred to the plane of the vie tragique, with its non-commonsense, cosmic perspective. When we are on the trivial plane, the realities of the other appear as nonsense–as overstrung nerves and so on. When we live on the tragic plane, the realities of the other are shallow, frivolous, frivolous, trifling. But in exceptional circumstances, for instance if someone has to live through a long stretch of time in physical danger, one is placed, as it were, on the intersection line of the two planes; a curious situation which is a kind of tightrope-walking on one’s nerves…I think he is right.”

In this series, the Tragic and the Trivial planes co-exist…day-to-day life intermingles with world-historical events. And the smallness of the stage…the confinement of the action to a single small village….works well dramatically, for the same reason that (as I have argued previously) stories set on shipboard can be very effective.

Some of the other characters in the series:

Daniel Larcher’s brother, Marcel, who is a Communist.  The series accurately reflects the historical fact that the European Communist parties did not in 1940 view the outcome of the war as important–it was only “the Berlin bankers versus the London bankers”…nevertheless, Marcel will be the first in the town to violently resist the occupiers.

Raymond Schwartz is a prominent local businessman; he runs the lumber mill where Marcel works as foreman..  A strong mutual attraction has developed between Raymond and Marie Germain, a farm wife whose husband is away with the army and is missing in action.

Judith Morhange is the (Jewish) principal of the local school, around which much of the series’ action is centered,  and Lucienne Broderie is a young teacher. Jules Beriot, the assistant principal, is in love with Lucienne, but hopelessly so, it seems.

Antoine (last name never given) is a young man who chooses to disappear rather than submit to the mandatory labor service in Germany.  He will become a leader of the local Resistance.

German characters range from Kurt, a young soldier with whom Lucienne shares a love of classical music, all the way down to the sinister sicherheitdienst officer Heinrich Mueller. The characters include several French police officers, who make differing choices about the ways in which they will handle life and work under the Occupation.

The most recent episodes continue through the Allied victory and into the post-war era. The end of the war does not mean the end of conflict.  Communists and Gaullists struggle for postwar power, both sides using historical memory as a weapon.  Considerable unfairness marks both the formal judicial trials of accused collaborators and the vigilante justice directed at same.

It’s been said that observed that a good test of a novel is whether you wonder what happened to the characters after it was over. True also for movies, I think, and this series attempts to answer the question with a six-episode epilogue (Season 7 in the American release packaging.)  As the series moves further away from the war and toward the present era, a flashback/flashforward method is used to follow the characters into much later life.

The entire series is available streaming on mhzchoice.com. Unlike many programs with subtitles, these are actually readable.

Highly, highly recommended, especially for anyone interested in France, in WWII-era history, and/or in human behavior under stress.