I brought this forward from 2008 for reasons that are not clear, even to me. I just liked it. There is some actual cognitive science based on misheard lyrics, which I had fun with in 2008 as well. An additional bit. Texan99 over at Grim’s Hall has listened to the new release of the studio tapes of the Beathle’s White Album and assures me there is much of the same. People fooling with lyrics in order to get the rhymes and sound right, with actual meaning being secondary.

There are websites devoted to misheard lyrics, for those of you who are interested. Some I suspect are hoaxes, intentional parodies of lyrics for comic effect: O Canada, we stand on cars and freeze…” Others seem like legitimate mishearings, especially by children: The ants are my friend and Blowin In The Wind.

There is an unusual concentration of misheard lyrics in rock music. Some might think it is the volume, or the sloppiness of pronunciation, or the drugs, but I believe the main factor was that there were plenty of lyrics that didn’t mean anything. The words were there to scan and rhyme, and that’s it. We choked the dead in those days to find meaning in those lyrics. Any crazy thing that someone might write could possibly have been correct. Why couldn’t Jim Morrison be singing “spiders on the floor (Riders On The Storm)?” Heck, he’d already written “Peace Frog,” and sung “our love become a funeral pyre.” How can you exclude the spiders for sure?

The bands were named Electric Prunes,

or Blues Magoos (I loved this album) 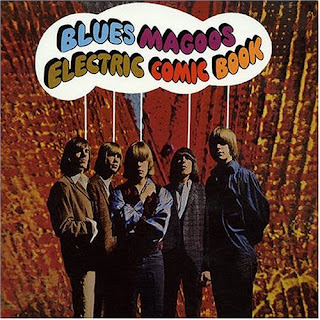 Or for ? and the Mysterians, we gotta have the full effect. No one but the bassman can play. The keyboard work was tossed out from the John Thomson EZ-Piano series Level One as not challenging enough. This site doesn’t seem to take on video embeds, but the link to 96 Tears is here.

Note from Wikipedia: The band’s frontman and primary songwriter was Question Mark. Though the singer has never confirmed it, Library of Congress copyright registrations indicate that his birth name is Rudy Martinez. His eccentric behavior helped to briefly establish the group in the national consciousness. He claimed (and still claims) to be a Martian who lived with dinosaurs in a past life, and he never appears in public without sunglasses. He has also claimed that voices told him he would still be performing “96 Tears” in the year 10,000.

Against that background, no wonder there are sites devoted to figuring out what Neil Young meant in all his songs For fun, the Buffalo Springfield.

Oh, hello Mr. Soul, I dropped by to pick up a reason
For the thought that I caught that my head is the event of the season
Why in crowds just a trace of my face could seem so pleasin’
I’ll cop out to the change, but a stranger is putting the tease on.

I was down on a frown when the messenger brought me a letter
I was raised by the praise of a fan who said I upset her
Any girl in the world could have easily known me better
She said, You’re strange, but don’t change, and I let her.

In a while will the smile on my face turn to plaster?
Stick around while the clown who is sick does the trick of disaster
For the race of my head and my face is moving much faster
Is it strange I should change? I don’t know, why don’t you ask her?

It doesn’t mean anything. Young said specifically that he just liked the sounds and collage of images in his lyrics. He would write dozens of verses, then picked the ones that sounded best.

19 thoughts on “And Now, Something Completely Different”