One of my favorite Seinfeld episodes has George getting into a fight with a clown who doesn’t remember “Bozo” the clown, his favorite. The clown shoots back at George, saying:

I had the same sentiment while reading my favorite magazine, “Strategy and Tactics“. This magazine covers military history and related articles from ancient times to the present day. Besides having great articles, the magazine also has very few advertisements, which means that it is quick and to the point. While we don’t shill for anyone at the blog, we do promote what we like, and every year I buy a subscription for myself, Dan and now Gerry on the blog (Gerry – if I never told you that, this is the reason for that yellow package you receive monthly). 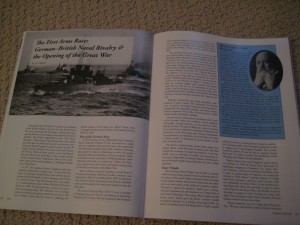 The article I immediately jump to is called “The First Arms race: German-British Naval Rivalry and the Opening of the Great War.” This article covers the fascinating time from the 1890’s until the early years of WW1 when Germany attempted to build an ocean going fleet that could challenge Britain. The box on the upper left is a brief biography of Tirpitz, the “mastermind” of German naval power.

German naval power was an alien concept – Germany is predominately landlocked, facing powerful enemies on its frontiers (France and Russia). While they needed to raise mighty armies on the ground to take the battle to their opponents, the Navy took masses of money and valuable materials (steel and cannons) that could have been allocated elsewhere.

The story is one I have read many times in various magazines, where “Jackie” Fisher revolutionized naval warfare with the all-big-gun Dreadnought, which instantly made other capital ships obsolete. While the Germans built many great ships, in the end the English fleet dominated the seas, climaxing in the “Queen Elizabeth” class with 15″ guns that performed well at Jutland, the major clash in the north sea in 1916 (unlike the battlecruisers). While the Germans won statistically, the British won because the Germans had to turn back and spent the rest of the war in port. The rest of their naval efforts were focused on unrestricted submarine warfare, and they came to an ignominious end when the German sailors rioted at war’s end and scuttled their fleet at Scapa Flow.

After I read through a story I’d seen many times before (always interesting because writers focus on different details, or different what-if scenarios) and had that self-satisfaction of knowing the end, I kept on reading through the magazine. One of their sections is called “For Your Information” where various essayists write “short, pithy” articles for the column.

In “Britain’s Royal Navy Today and Tomorrow” the author wrote a brief and excellent summary of today’s Royal Navy and their plans for the immediate future. From the article:

“On March 23, 2007 a total of 15 British sailors and Royal Marines on patrol off the HMS Cornwall were seized by Iranian patrol boats and taken prisoner. Possessing a fleet that amounts to little more than a collection of aging frigates and destroyers supplemented by a trio of small aircraft carriers, Britain lacked the means to rescue that personnel… inflicting on the Royal Navy one of the greatest humiliations in their modern history.”

Wow. That pithy paragraph summarizes today’s reality, not the giant ships of the line, dedication and bravado that the term “Royal Navy” conjures in my head.

While the article continues by describing the newly improved armaments coming on line to upgrade the Royal Navy in order to deal with situations such as this, and how they plan to deploy these vessels, it still leaves me shaking my head. I need to accept today’s reality, and the past glories even of WW1 vintage are as distant as reading about Trafalgar 200 years ago.

4 thoughts on “The Royal Navy”