I moved to California in 1956 to attend college. Los Angeles was a paradise. The weather was great. The traffic was no problem. I learned that the LAPD did not take bribes and was not amused at attempts to offer them. After growing up in Chicago, I had learned to put a ten dollar bill behind my driver’s license in case I was stopped. In Los Angeles, I did so and was lectured about the consequences of offering a bribe by a stern LAPD officer.

I lived in the fraternity house and one year slept on an outside second floor porch. I had four blankets on my bed but no problem, with flies or mosquitoes. I remember flying back to Los Angeles one New Year’s Eve from Christmas vacation in Chicago. The palm trees told me I was home. There was a brush fire in the hills but it was nice to be back. I would sometimes drive up to Sunset Boulevard just to see the city at night. The TV show, “77 Sunset Strip” showed just what it looked like. We would drive into Hollywood and sometimes eat at Villa Frescati. We had a lot of fun. Too much fun as I lost my scholarship.

The first sign of trouble was described in Victor Davis Hanson’s book, “Mexifornia.” There was trouble before that as the Watts Riot in 1965 began the endless pandering to the angry mobs.

The Rodney King riot in 1992 was another harbinger of trouble. The LAPD officers who saved Rodney King’s life by taking him down without significant injury before Melanie Singer shot him, as she planned to do before they arrived, were rewarded with prison sentences from the second trial. Double Jeopardy was not outlawed in the Clinton Administration. By that time, I was nearing retirement as my back injury was affecting me.

I had lived in Orange County for 20 years at that point and it was still a great place to live. After my back surgery, I spent a year in New Hampshire. Had my grant come through, I might have stayed, at least for a few years. I returned thinking I might have a second career in administrative medicine. I did work part-time reviewing workers comp claims but the career in measuring medical quality never got started.

The decline of California has become more and more apparent. Even the hospital in Orange County where I had practiced for 20 years has entered a period of decline.

In 2008, we began to see the anticipation of Obamacare. Hospitals began to expect tighter margins and, being the most incompetently managed large organizations in the US, they decided to reorganize with little idea of how to do so. They expected that vertical integration would increase their profits (Which are as large in non-profits and in for-profits) so they spent millions to buy the medical practices of doctors on the staff. This put the doctors on salary and bonus systems but there was a natural conflict of interest. Doctors had for many years been the object of frustration and even hatred from hospital administrators. We don’t take orders well and many resisted the efforts of the hospital to make us order either more tests,

Doctors in urban areas, or even deeply populated suburban areas, are employees. The days of independent practice are mostly gone.
In 2017, we left California for Arizona where I had had a weekend home for years. I still subscribe to the local Orange County newspaper where I can read stories like this one, and this one.

I used to take my medical students to homeless shelters in downtown Los Angeles to see how County patients lived. Now “the homeless” are everywhere, defecating on the streets of San Francisco. A medical group, probably the American College of Surgeons, cancelled their San Francisco convention last year.

The neighborhood’s open drug use and tent encampments, among other issues, are what allegedly prompted the unidentified medical group to call it quits with SF, even though the city spends approximately $300 million to help the continuing crisis.

“It’s the first time that we have had an out-and-out cancellation over the issue, and this is a group that has been coming here every three or four years since the 1980s,” Joe D’Alessandro, president and CEO of S.F. Travel, tells San Francisco Chronicle’s Matier and Ross.

The ACS Clinical Congress has been there every three years since the 1960s. No more.

Then the neglect of infrastructure was emphasized by the 2017 Oroville Dam failure.

In February 2017, Oroville Dam’s main and emergency spillways were damaged, prompting the evacuation of more than 180,000 people living downstream along the Feather River and the relocation of a fish hatchery.

This year is another wet winter and the dam has probably not been repaired. Nothing is fixed as the state declines into decrepitude.

Victor Davis Hanson sums it up.

California ranks first among the states in the percentage of residents over 25 who have never finished the ninth grade— 9.7 percent of California residents, or about 4 million Californians. It also rates 49th in the number of state residents who never graduated from high school — or about 18 percent of the current population.

In other words, about 7 million Californians do not possess a high-school diploma, about equal to the size of the nine counties of California’s Bay Area, roughly from Napa to Silicon Valley. In some sense, inside California, there is a shadow state consisting of high-school dropouts that’s larger than 38 other U.S. states.

A large share, if not the majority, are illegal aliens.

What is going on?

Three concurrent — and yet antithetical — trends explain the malaise, though they’re rarely talked about. Indeed, one of the landmarks of the new California mentality is denial and self-righteousness that assume it is illiberal to notice that a quarter of the nation’s homeless population sleeps on California streets, or that violent crime is 20 percent higher in California than the national median, or that San Francisco ranks No. 1 in per capita property crime rates of all the nation’s largest cities.

The Grapes of Wrath — in Reverse

Second, in the last decade and a half, about 6 million Californians over the age of 25 left the state; in the last 30 years, perhaps 10 million fled. There are no accurate statistics on the political ideologies of the departed or even their actual numbers. But most studies suggest that the reasons for radical outmigration were quality-of-life complaints, soaring home prices and taxes, poor state services, failing infrastructure and schools, and rising crime.

Joel Kotkin has a new piece in City Journal That should worry California politicians.

a new Brookings study shows, millennials are not moving en masse to metros with dense big cities, but away from them. According to demographer Bill Frey, the 2013–2017 American Community Survey shows that New York now suffers the largest net annual outmigration of post-college millennials (ages 25–34) of any metro area—some 38,000 annually—followed by Los Angeles, Chicago, and San Diego. New York’s losses are 75 percent higher than during the previous five-year period.

They are too dense and too arrogant in their ignorance to notice.

We left and are happy in Arizona. We are close enough to drive over for birthday parties. Our home in Tucson would be more than a million dollars in Orange County if we could even find a one acre lot. 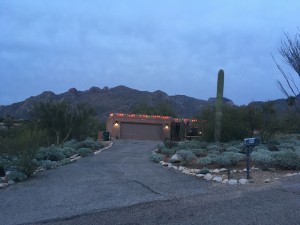 Tucson has an Opera and the University of Arizona is here. I am sad to see what has become of California. It was a wonderful place when I was going to college and for decades after. The insanity that has gripped the state seems to be a development of the past 25 years. Jerry Brown and his obsession with global warming is part of it. The massive influx of illegal aliens is another part. I doubt it can be salvaged in my lifetime.