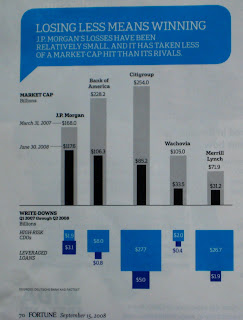 In business literature risk-taking is often celebrated, and the battling against long odds in the hope of redemption. Many business case studies have dramatic story arcs where someone made a bet on an unproven technology that eventually saved their company (like Steve Jobs with Pixar and Apple). The implied story arc of companies in decline (like Montgomery Ward, which felt that the great depression was going to return after WW2 and missed out on the postwar boom) is that companies that miss chances to take risks are often punished in the end with failure or takeover.

Jamie Dimon is the CEO of JP Morgan Chase. The bank that he runs has mostly escaped the recent credit crisis and CDO issues without major damage. His story, which was well told in the Fortune September 15, 2008 issue, is that by avoiding risk, he saved his bank to become much stronger than its competitors. His bank pulled out of underwriting dodgy mortgages and issuing CDO’s when they felt that the returns weren’t worth the implied risks (which they measured in the credit default market, among other places). At the time, JP Morgan Chase had a market cap far below their peers and were being punished by stock analysts for not leading in these high growth (and ultimately disastrous) categories.

If you look at the graph above, JP Morgan Chase now has a market cap bigger than its competitors, which didn’t happen by raising their stock value but by avoiding a catastrophic hit that their peers faced. While “Losing Less Means Winning” is a polite way to say it, I’d prefer “Let’s Suck Less” which is a more accurate term (since JP Morgan Chase did take multi-billion write downs, after all).

This should be a standard and oft-mentioned case in the business school literature, because it highlights the real benefits of chasing the latest fads even if the market is punishing you for it in the short term. In the ’80s, the markets demanded conglomerates, and companies went out and bought other companies in unrelated industries. Later, the market changed its mind, and companies shed these subsidiaries and focused on their “core” business.

Another element in all of this is the fact that Jamie Dimon sweats the details and didn’t farm out everything to his lieutenants (although some of the other guys in trouble also behaved this way, but famously the head of Bear Stearns went on vacation & played golf and bridge while his company was circling the drain). However, he relies on a cadre of advisors that he has brought along with him for years, and they have open discussions of difficult topics rather than acting as a legion of “yes” men and women.

These basic, seemingly boring elements (avoiding risk without sufficient reward, retaining solid talent and having open communication) should be basic B School elements, rather than shooting for the sky with risky investments and punishing those that don’t take risks. But since this seems rather sensible (do I need an MBA to learn that?) don’t expect to see it any time soon.