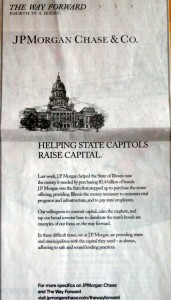 A difficulty with finance is that statistics are all backwards-looking. For instance, there were umpteen articles about how stocks “return x% over y number of years” or that “residential real estate is a solid investment based on returns in area x over y number of years”. We all know how those assumptions turned out.

While research is useful and assumptions need to be made, a crucial error that has lead to much of our financial malaise is due to retaining assumptions too long rather than chucking them aside when the underlying facts on the ground change. You also need to be aware of shifts in sentiment and try to anticipate what is going to happen next.

Specifically, municipal bonds have historically had a low default rate, less than 1%. And when they do default, investors generally have a relatively high “recovery percentage” (as opposed to Lehman when creditors received 7 cents on every dollar owed). Many investors view them as almost as safe as the debt of the Federal government. Municipal bonds are (generally) tax-free, so a municipal bond can have a lower debt coupon and still attract as many investors as a tax-adjusted amount from a corporate bond sale. I am generally speaking of general obligation debt, not the revenue bonds that might be tied to corporations or other initiatives (these carry a higher coupon and default rate).

Since municipal bonds are (generally) tax free and have historically had a low default rate, their current yields of > 3% for a 5 year issue (4% if you assume a 28% tax bracket) seem competitive (comparing AAA rated general obligation bonds for large issuers like states).

Other municipalities who were smaller or special purpose (such as water districts) and had to go back for frequent financing (“auctions”) had significant issues earlier this year when the auctions “failed” because they were no longer being supported by the (often now defunct) investment banks. This is a separate topic but very much related in that almost all governmental entities have to go to market frequently for financing – they don’t pull in a bunch of money with a large issuance and then sit on it – they typically go to the market frequently to issue debt and they “assume” that there is a functioning market there to receive their offering (maybe they will have to pay a bit more, but they figure that liquidity is present).

Anyone (around the world, even) with any access to media has heard the travails of our Illinois governor. I won’t go into it here.

However, I did start to see how the corruption scandal and the creeping thought that while historical default ratings for municipal bonds is low, this assumption might not extend into the future, and that some state would likely start to feel pressure.

Illinois’ finances were in a precarious state of affairs before the current scandal. For years Illinois has been under-funding their pensions (we are a basket case, among the worst in the nation) and playing various financial games to defer the day of reckoning.

Recently the bond issue was delayed because the attorney general would not sign off on the legal language indicating that there were no significant issues, because of the governor impeachment scandal. There was discussion that this delay and the “corruption premium” in Illinois would cost an extra $20M in interest (along with keeping higher cost financing that this debt issuance would fund).

So I was waiting to see what was going to happen with this debt sale, and how it was going to be received in the market. I didn’t hear much news about the sale… until I saw this article in yesterday’s Wall Street Journal (the picture in the post).

JP Morgan bought the entire issue… so that is how they sold so quickly! I guess JP Morgan is borrowing cheaply from the US Treasury (interest rates are very low) and now they are recycling that funding into purchasing state debt wholesale. This is generally a new twist in the whole process and we will have to wait until the next sale to see how Illinois does (or if they can convince some other hapless bank to purchase the whole issue).

I did laugh at the tag line on this advertisement:

“In these difficult times, we at J.P. Morgan are providing states and municipalities with the capital they need – as always, adhering to safe and sound lending practices.”

It is unclear to me how buying an entire bond issue that the market wasn’t too keen on from a state where the entire government is consumed with impeachment and generally is a fiscal basket case constitutes “safe and sound lending practices”, though.

2 thoughts on “Municipal Bonds… and Illinois”