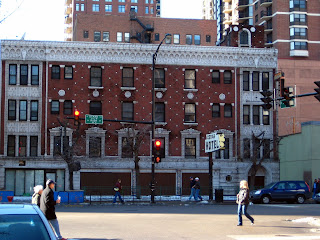 Since the weather here in Chicago is usually so unfavorable, people love to go outside as soon as there is a break in the gloom. One of my favorite pastimes is to sit outside and have a drink, catch a little sun, and watch the world go by. It is even better if there is at least semi-edible bar food (I am not too picky). 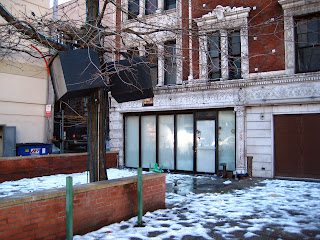 When I lived in Wicker Park / Bucktown there is a local bar called “Northside” that has a great front deck near a busy intersection and it was fun to sit out there on a Friday afternoon or Saturday and just relax. Here in River North there are some outdoor spaces but I liked to take a walk up to a place called “Melvin B’s” that had a nice deck outside in the V*agra Triangle. 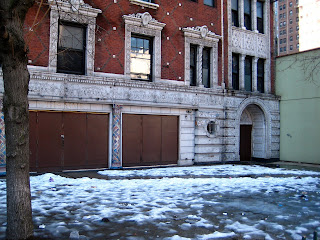 Here is a link to a site with photos of the bar when it was jumping and also an interview with the owner and other nostalgic drunks. After reading that article I noted that it said that they were going to build a high-end Mondrian hotel (like the one in Los Angeles) at that location. Here is the press release during the high-market boom year of 2007:

Mondrian Chicago… is expected to open in 2010

Mondrian Hotels is owned by the Morgan Hotels Group and their NASDAQ ticker is MHGC. Their stock is now trading for under $5 and recently was near oblivion, and their total market cap is under $100M, with over $750M in long term debt. Per their balance sheet they apparently refinanced their short term debt due to mature into long term debt in early 2008, before the markets collapsed. That is very smart since they probably couldn’t get financing today at about any price. When I look at the “on the horizon” page for Morgan Hotels web site they mention a Boston hotel coming on line in 2009 and a Palm Springs Hotel in 2011. Apparently Morgan isn’t planning on a Mondrian in Chicago in 2010 or even in 2011, if at all.

The other partner in their joint venture (per that press release) is a company called “M Development”. Here is an article where M Development is being sued over that deal by a company called Pinnacle over a 2% finders fee. I don’t know if the construction is being held up by this lawsuit specifically or over the general malaise in the market.

Also, other people are apparently fed up with the delays at this and other M Development properties. Here is a link to an article where someone is complaining to the alderman about the site.

Just call it the nightmare on Elm Street. After all, that’s what community members are calling the massive, “disgusting, empty and dirty” property on the northeast corner of State and Elm, which spans more than a half city block and is owned by M Development.

Well, I learned a lot more about development and the city than I intended to while just researching a place where I used to like to drink outside. To wit:

– Morgan company, who owns the Mondrian, has a stock and market value that has plummeted
– Mondrian hotels don’t even list this hotel “on the horizon” at their web site, and don’t discuss them in their forward looking analyst presentations
– Their partner, M Development, was apparently sued over the deal
– The alderman is calling on M Development them to clean up the site
– If you read up on that article in the local paper, above, you can see that M Development has other properties, including the former Esquire movie theater, and I don’t think much has happened with that, either
– Clearly no construction at all is happening at the site, and they don’t appear to be preparing to tear down the building

Thus the building is now sitting there idle, with the boxes that housed the former TV’s where you could watch a baseball game sitting forlornly up in the tree. Given that this real estate downturn is likely to be LONG (after the late 80’s early 90’s crash no big buildings went up in Chicago for more than 5 years that I saw) maybe they will want to restart something with that outdoor space and I’ll be the first one over there to hoist a beer and eat what ever they are frying up (definitely deep-fried) in the kitchen. I have seen similar things happen where sites that were cleared in order to begin construction (that never started) have been re-surfaced and turned into open air parking lots to at least earn a bit of income until the economy turns around.

It is strange that a post about a place where I used to sit outside and have a beer morphed into the stock market, debt financing, legal murkiness and the overall real estate market, but I guess it is all interconnected. And with the internet you can find information quickly, it just takes a bit to process it all into a semi-coherent picture.

4 thoughts on “Real Estate Bust in a Microcosm”