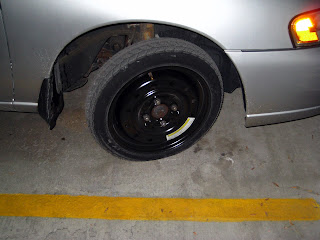 Recently I went to the Chicago Dog show and then down to Hyde Park, where our president used to live, to eat at a restaurant I saw on the show “Check Please” called Calypso. The restaurant was a Caribbean restaurant and the food was excellent. It seemed nice to get some sun and imagine I was in the tropics, if only for a minute.

While driving home on East Hyde Park Boulevard, a major street in Hyde Park, I was driving with a car right beside me and I came up to a monstrous pothole. Since there was someone right next to me I tried to swerve and slow down but still ended up in the hole. The depression was very large and the edges were completely jagged – it was more like a construction site than a pothole.

My tire was flat in a matter of seconds. I pulled over in a residential neighborhood and with the help of some friends along for the ride (I am not a particularly handy guy, although I was game to get out there and do the work) we changed the tire and put on the little spare.

Later I heard that the City of Chicago will reimburse you for pothole damage but I wasn’t able to find the link on their site. I will look into it a bit more but I am not too hopeful that our maze of bureaucracy would be paying me out in my lifetime.

I was looking to get new tires for my car, anyways, since the damn Altima will live forever (it is going on 10 years) so I wasn’t really out much. Glad I didn’t replace the tires FIRST because there was no way any tire could have survived that ditch.

The ironic part of this is that city mayors are scrambling to figure out what to do with the windfall of cash and they can’t even bother to plan to fix a major pothole right near the President’s house.