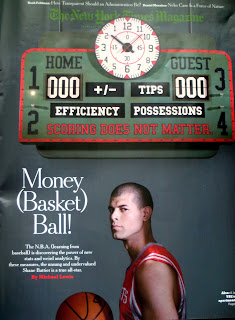 Michael Lewis is a great journalist and author of several books that are highly recommended by Dan and I. “Moneyball” tells the story of the Oakland A’s, and how they used statistics and a novel view of baseball to win a lot of games on a small budget, as well as the story of Billy Beane, who went from a can’t miss, 4 tool prospect to an MLB bust, and then on to revolutionize baseball as manager of the A’s. “The Blind Side” explained the evolution of the left tackle in the NFL from an also-ran to one of the most important positions on the field, along with a lucid an excellent description of the evolution of passing offense, which sadly enough has apparently never been read by our beloved Chicago Bears. The book also featured Michael Oher, who was plucked from total obscurity to starting on Ole Miss, the only team that knocked off eventual NCAA champion Florida last season. For non-sports related items, Michael Lewis also wrote the famous book “Liars Poker” which explained the rise of bond trading at Salomon Brothers and is a Wall Street classic.

Recently Michael Lewis wrote an article on basketball that appeared in the NY Times magazine – to find the article go to the NY Times site and type in the title of the article in the search engine – “The No-Stats All-Star”.

In this article, Michael Lewis takes on basketball the same way he took on baseball and football, above. He is attempting to do what the best journalists do – tie in the “human element” with an original analysis of a complex topic. The key to Michael Lewis’ writing is that his human element actually matters and isn’t just fluff to glue the story together.

In baseball, the analysts over time have revolutionized the game, although these changes are often not recognized by traditional sports analysts. The value of a walk was long neglected, and statistics like batting average and errors (rather than on-base percentage, slugging percentage, and a more accurate representation of fielding) were ignored. Over time, through the efforts of many people, this has been corrected, and teams like the Boston Red Sox have fully embraced the precepts and gone on to championships.

In football, the game is much more revolutionary than baseball, and Lewis describes a phenomenon that has already gained speed, which is the importance of the offensive line and the revolution in passing offense (although these facts are often lost on our beloved Chicago Bears).

In basketball, however, the game still is groping towards a revolution, and here Lewis gets to the front of the line with his description of Shane Battier. Shane Battier is by all accounts exceptionally intelligent. Since leaving Duke his worth in the “fantasy” market is low, since that view values points above all and defense only to the barest levels (steals, blocks), but can’t really value what Shane Battier does.

Shane Battier uses information provided by his coaching staff to statistically reduce the effectiveness of the most important player on the other team. In this article it focuses on Shane guarding Kobe Bryant, and the impact of Shane in degrading Kobe’s performance.

The coaching staff is attempting to get opposing players to do things that are low-percentage, while they are attempting to increase high-percentage activities. For example, if a player has a lower shooting percentage coming from his left than his right, you want to block off the right and have him go to his left. Or you want to have him shoot from an area on the floor that gives you the best percentage opportunity to win. One item that surprised me was the fact that fouling was viewed as the worst defensive activity. The article needs to be read in its entirety because I can’t fully summarize its complexity and Lewis is a much better writer than I am as a blogger.

I would expect, over time, that teams who embrace this type of analysis and can find players (like Shane) smart enough to take advantage of this behavior, and the “street ball” players who live it up on the traditional stats will not have championship rings to show for it. The players are being paid for their statistics, in many cases, and not their ability to drive wins for the franchise. This is often due to the fact that the statistics are promoting the wrong behavior.

The saddest part, as a Chicago Bulls fan, is that our team has explicitly embraced players least likely to thrive under a statistics-based system. Tyrus Thomas, who has incredible athletic skills, is possibly the least “smart” under these types of analysis, and much of the rest of the team plays the same way. Hopefully they can embrace these types of statistics and build a future team that can win, since it is unlikely that another MJ is going to show up any time soon.