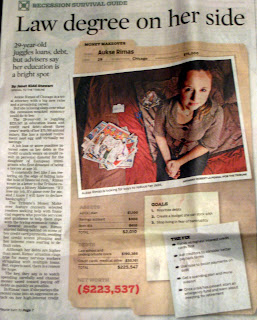 The Chicago Tribune business section has a series where readers write in with their financial issues and the columnists seek professional help and recommendations and publish the results. This column is titled “Law Degree on Her Side” and shows the plight of a woman under 30 who is a lawyer but is struggling under a mound of student debt and is considering bankruptcy.

A big element in our economy’s struggle is the fact that the analysts and “experts” were focused on the income statement and not the balance sheet. An income statement view focuses on profits, or the difference between earnings (in her case, salaries) and expenses (rent, living expenses, etc…) and what remains each year. Companies often report earnings EBITA which stands for “Earnings Before Interest, Taxes and (depreciation) and Amortization”. In this model, you become a lawyer because you can make a lot of money (top line revenue) and use it to support the rest of your living expenses.

However, this “income statement” model ignores the debt needed to finance education and expenses related to education. This debt keeps piling up and is a negative item on your balance sheet, which is the long term debt that you owe others, along with the annual interest that you need to pay to service this debt. In an analogy to the stock market, it is the debt payments, along with the fact that companies can’t come up with the cash to pay off principal (or roll-over debt) that is causing the liquidation of companies like Circuit City, Linens & Things, Mervyns, and soon to be many others.

In this lawyer’s case, her balance sheet is “negative” meaning that she is insolvent or has a negative net worth. She has a tiny amount of assets (a bit of retirement savings, some cash on hand, and maybe equity in a car or something) which is all she can show to offset a mountain of debt.

I don’t have exact statistics but I would venture that most Americans have a negative net worth nowadays. By this I mean that the value of their debts exceeds the value of their assets. I also run a site called “trust funds for kids” and I often tell my nephews and nieces that even the relatively small amounts that we put aside ($10,000 or so), as long as they don’t accrue debt, will make them better off than most Americans who have worked their entire lives, since they will have a positive net worth. Obviously some of this is tongue-in-cheek since you need a steady stream of income to pay minimal living expenses but there is much fundamental truth in that analysis in that if you pile up debt you will never accrue enough assets to offset this debt. And if you have a negative net worth, you can never stop working (retire) unless you have a guaranteed string of income high enough to offset your living expenses, interest costs and principal repayments.

These debts cost money to finance, and this cost is in the interest rate. The woman in this article is drowning because $200k of debt will mean that interest payments of $14k ($200,000 * 7% or so) would be needed just to service the debt, without putting ANY sort of dent in the principal. Likely the principal is going to be due over a certain amount of years – let’s say 20 years – so she needs to pay $10,000 / year in principal plus $14,000 in interest (the interest will go down in future years as the principal is paid down) on the current balance. If her income is below certain thresholds (her income, at $75,000, is for now) then she can receive a tax deduction of $2500 based on the interest component (see IRS publication 970). Thus (using this relatively simplistic analysis) of her $75,000 / year salary, $24,000 (or almost 1/3) would go for debt principal and repayment (the tax deduction would likely offset this for about $1500 in cash, depending on her tax bracket).

One very unfortunate difference between companies and this student is that companies can eliminate debt through bankruptcy (if they are cash flow positive on an EBITA base and can obtain interim financing), but the student debt can NEVER be discharged. I remember when I was studying for my CPA exam (20+ years ago, so maybe it isn’t an exact quote) that they had a section on bankruptcy and they mentioned that the discharge of student loans through bankruptcy was eliminated because

Doctors, who require mounds of debt to pay for medical school as well as finance living expenses while they are interns and only modestly paid, used to accept the diploma with one hand and declare bankruptcy with the other. Tiring of this tactic, the schools lobbied and changed the laws so that student loan could not be discharged through bankruptcy

Thus taking up student debt is serious indeed; unlike your house (which you can walk away from or short-sell to the bank) or auto, you can NEVER discharge this debt, and have to either pay it off or have this debt hanging over your head for the rest of your life (essentially meaning that you can’t accumulate any assets).

If you read the article, not only did the woman take on student debt, she also took a vacation and put it on her credit cards, which have a much higher interest rate (maybe 20% or so) and need to be paid off before she can make a serious dent in the student loans, unless she wants to declare bankruptcy. And even if she does declare bankruptcy, given her level of income, it is likely that the court will make her repay at least some of these obligations.

VALUE OF A DEGREE

When you incur tens of thousands of dollars in debt to get your degree (or $200,000, in this unfortunate case) you need to ensure that your degree will pay enough to not only support you going forward (and your family, if you intend to have one) but also to pay off the student loan debt and interest accrued on that debt.

In the case of this woman, she has a law degree. However, one item that wasn’t advice in this article is that she has to leverage this degree to make a lot more money. She needs to work for a firm with high billing rates and she needs to put in a lot of hours. Traditionally law firm employees had to bill 2,000 hours / year – note that this is BILLABLE work so everything that isn’t billable has to go into the rest of the week (or weekend) after you are done with a full days’ work, including what shred of a social life you’d like to have.

Given all the taxes and costs of living in Chicago (remember that the sales tax is over 10%, property taxes are high, and Federal and state tax rates are going up) if she increases her income to pay down debt effectively almost 50% of every dollar is going to be taken away from her between social security and taxes of all stripes. So she needs to increase her income by $50,000 to come up with the extra $25,000 which would allow her to pay down this debt sooner.

My uncle (now deceased) was a man who fought for the little guy. He was a lawyer with his own firm and he represented the poor and often did death penalty cases for the state (as a defender). He summed it up to me that

You can either represent poor innocent people or rich guilty people

I suggest that she find some major companies with problems and burn up a lot of billable hours helping them. Her $75,000 / year job will never pay enough.

The other more subtle point in this article and overall in finance is that the implied rate of return for investments has been decreasing. Anyone who hasn’t been fully invested in gold and treasuries has seen the value of their investments plummet, possibly by as much as 50%. Various articles come and go about how the DOW is now back to 1992 or prior – although this is kind of specious unless you were heavily invested all this time – sadly enough most people bought into the market much nearer its peak, so they took big losses on actual cash put into the market (and didn’t just lose gains from prior years).

If the markets are down 50%, it will likely take YEARS of sustained 15%+ growth, for instance, just to get back to where we were in 2007. Thus while those returns might be prominently featured in advertisements, essentially for the average investor those returns are needed just to get you back to zero, and then you need to make returns BEYOND this in order to increase your asset base.

Why does this matter? Because while the implied return on YOUR investments has declined (is frankly negative) and banks are paying about 1% in interest (BEFORE taxes), a loan at 7% is very pricey. In the old days when people put in 10% / year return in their model, they figured that a 7% loan was cheap money. Now with negative returns or puny returns in the risk-free market, 7% means that your loans are outpacing your gains and that your problems increase every day that you don’t pay off that loan. I won’t even go into the impact of a 20% credit card loan (plus the fact that consumer interest isn’t even deductible).

ANY students who are considering taking out debt to finance their education NEEDS to understand the gravity of the situation:

1) these loans can NEVER be discharged through bankruptcy
2) the interest rate you are paying is likely higher than the return that you will make on your own assets
3) you need to earn enough money to pay off the principal and interest, as soon as possible
4) as you earn more money and try to pay off these loans, high taxes and cost of living eat up the value of each dollar earned so that you essentially have to earn $2 to get $1 to pay towards your obligations
5) you need to live as cheaply as possible and get this done as quickly as possible – in this case the woman worked as an unpaid intern which just let her interest accrue and she took expensive overseas vacations which caused her to add credit card debt
6) based on all of the above items, it likely isn’t worth accruing debt for a degree unless your degree is extremely marketable (law, medicine, finance, engineering) – that doesn’t mean that you can’t follow your passion, but it does mean that you need to pay-as-you-go or find a way to do it through scholarships or at your local community college
7) if you incur debt, you need to make money ASAP and forgo other social options, expenses and fun – else you will never escape the debt trap. You spent all this money for the degree, so now you have to leverage it to the hilt and make as much money as possible

Cross posted at LITGM and Trust Funds for Kids

17 thoughts on “Negative Net Worth”