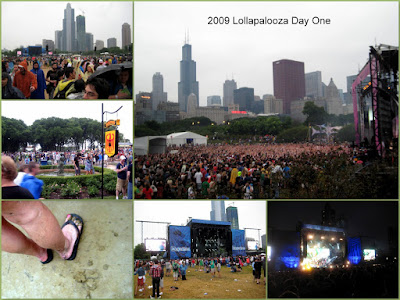 Lollapalooza Day One was quite muddy and cold, which is going to be quite a change from the other days since it is supposed to be extremely hot (for the first time this year in Chicago). The festival attracts over 225,000 people over three days, and it seemed very full, but not too crowed.

The highlight of the day was Depeche Mode. Depeche Mode played at the south end of Grant Park, opposite Kings of Leon, and a lot of people had to make the hard decision of which band to see. A lot of folks probably did what I did which was figure that Kings were going to be around for years to come but it was unknown how much longer Depeche Mode would continue touring.

I had kind of low expectations of Depeche Mode considering that their main singer, Dave Gahan, has had myriad troubles over the years and they seemed to be canceling a lot of shows. But Depeche Mode put on a great show, tied in with fantastic visuals, and Gahan really worked up the crowd. By then the rain had long stopped and the crowd wasn’t too packed in and it was just a great finish to the evening.

One quibble… that Budweiser was everywhere. Pretty much the only beer, except for a couple others in the German beer tent. You can’t look too sophisticated holding a “king can” of Bud Lite. They might as well have given out paper bags, too.