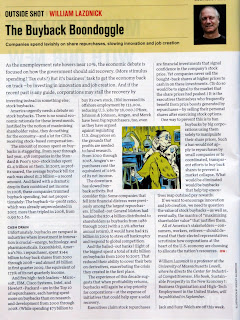 As the unemployment rate hovers near 10%, the economic debate is focused on how the government should aid recovery… but it’s business’ task to get the economy back on track – by investing in innovation and job creation. And if the recent past is any guide, corporations may stall the recovery by investing instead in something else – stock buybacks.

This article is an example of poor journalism and populist reasoning right from the start. You can see the writer’s view on business – that its purpose is somehow to create jobs – and that this should be the main goal of a business. Which, frankly, is a terrible assumption.

Businesses are created to make money. Businesses are (usually) run by smart people who want to invest their equity capital (raised from the stock market) in the place that will earn them the most money, and if they have a lot of equity capital outstanding (in the form of stock proceeds and retained earnings) they have to put this money to work on new projects that are at least as profitable as their current portfolio, or they are decreasing their company’s profitability, which is severely disliked by investors.

And the United States nowadays is a poor place for new investment. Want to know which country in the developed world has the least friendly tax outlook? The good ol’ USA. Per that highly recommended site “The Tax Foundation”

Currently, the average combined federal and state corporate tax rate in the U.S. is 39.3 percent, second among OECD countries to Japan’s combined rate of 39.5 percent… Many states impose state corporate income taxes at rates above the national average of 6.6 percent. Iowa, for example, imposes the highest corporate tax rate of 12 percent, followed by Pennsylvania’s 9.99 percent rate and Minnesota’s 9.8 percent rate. When added to the federal rate, these states tax their businesses at rates far in excess of all other OECD countries.

The US also has a surplus of lawyers and a highly litigious culture that requires businesses to spend an inordinate amount of time preparing for lawsuits of every sort. And if you want to build something, such as a manufacturing plant… you must be kidding, right? The environmentalists and regulators will tear you to shreds, with protests, forms, and a never-ending stream of bad publicity. And if you have unions, or are in a state loaded with unions (such as the Midwest, sadly enough) you have a militant work force demanding gold plated benefit plans and happy to walk out and crush your operations at a moment’s notice.

It is true that compared to dictatorships and countries without the rule of law there are many advantages of investing in the United States, but this isn’t an absolute comparison of the US vs. one of those countries, but a relative comparison given that a US corporation could choose to locate facilities anywhere around the world. And more insidiously, a US corporation wouldn’t even raise capital here to build an overseas business – they would raise that money from the start in a tax haven or in a private corporation with a complex legal structure that wouldn’t be in the USA.

Nowhere in this article does the author discuss how to make America’s business climate more favorable to businesses, which would encourage them to invest more in the United States and start projects that would enable innovation and job creation. Our poor business climate is why businesses won’t invest more here, and that is the issue that the author needs to tackle directly, not through jawboning and demanding that regulators and politicians review business practices, which will basically just yield us “more of the same”.

Regardless of the provenance of this argument, I too agree that stock buy backs are a bad idea. A stock repurchase occurs when a company goes out and buys its own stock back from the market (there are many ways of doing this) which reduces the number of shares outstanding. Since companies are widely judged on a metric called “Earnings Per Share” or EPS, the fewer shares that you have outstanding, the better your earnings look.

A better idea would be to return these funds to shareholders through dividends. Dividends receive favorable tax treatment, although maybe not as favorable as stock buy backs, but more importantly they give this money directly to the share holders so that the share holders can determine what they want to do with it themselves, rather than essentially leveraging their existing investment in a corporation. Corporations do not like to raise dividends because it changes the expectations of share holders – once share holders receive dividends, they generally get angry and punish the stock price if those dividends are cut. Dividend cuts are public events, understandable by all share holders, while starting and stopping a corporate buy back is an opaque process generally not understood by everyone except for a few stock analysts.

Rather than focusing solely on EPS, companies could tout their stock price, future growth prospects, and dividend yield as a measure of why share holders should consider them a sound steward of the funds that they have been entrusted with. A strong payout sends a message that the business is committed to profitable operations and fiscal discipline, today and in the future.