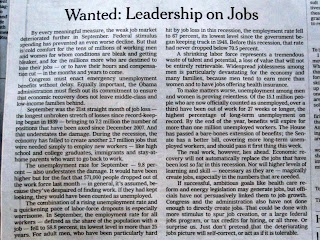 The Sunday editorial page of the New York Times has an article titled “Wanted – Leadership on Jobs“. This article describes the current unemployment situation as bleak and requests “leadership” from politicians to arrest this trend. The brief editorial is nine paragraphs long; 8 of them describe the problem, and then the 9th (summary) paragraph includes their recommendations:

If successful, ambitious goals like health care reform and energy legislation may generate jobs, but officials have not persuasively linked them to job growth. Congress and the administration also have not done enough to directly create jobs. That could be done with more stimulus to spur job creation, or a large federal jobs program, or tax credits for hiring, or all three. Or surprise us. Just don’t pretend that the deteriorating jobs picture will self-correct, or act as if it is tolerable.

Often times our debate with the NY Times is presented as a left / right political view issue. However, in this case, the differences are even more profound – the NY Times simply has no idea what the problem set is, so they can’t even fathom a solution.

The first and most profound misunderstanding is that jobs are not “created”. They don’t come about from a fiat by government and can’t be “willed” into existence.

Jobs are a by-product of:

– Either a successful (profitable) business or a business in growth mode
– That has a need for services or labor to meet a business requirement
– That they can profitably sell to a third party, or leverage as part of a broader business venture

The issue of whether or not to hire additional employees is an issue that all of the employers that I have worked with or consulted for over the last two decades have wrestled with continuously. If government or the NY Times wants to increase the number of jobs, they need to peer inside the head of a business executive and work to push the levers that would make them more likely than not to hire. Thus the first and most significant problem with the lack of understanding of the NY Times is that they don’t even frame the problem correctly – if they want to create jobs, they need to think like a business person.

From a business point of view, the first issue is whether to automate systems or add additional labor. Hundreds of billions of dollars have been invested in productivity boosting items such as computers, automated production, systems for coordinating with suppliers, and the like, basically to reduce headcount in tasks where automation is feasible. Many of these efforts have been successful; there are fewer individuals performing manual labor at many companies and other rote tasks have been automated. Web sites and IVR systems replace phone operators; and the web eliminates entire distribution channels.

If you choose labor over automation and can even overcome the hurdles of investing in the United States, which has a hostile tax and legal environment, why would you hire permanent staff when you can hire temporary staff, or outsource to a foreign nation? These options are often financially compelling and / or offer flexibility that permanent staff can’t match.

Another element in hiring considerations is uncertainty. “Cap and Trade” and “Health Care Reform” will (likely) place big burdens on business and / or potentially change the hire / don’t hire / offshore / temporary equation. Thus if you are on the fence about hiring, uncertainly is going to reduce your chances of “pulling the trigger” on a new hire. Plus all of the Federal programs and borrowing will likely lead to higher taxes (plus virtually bankrupt state and local municipalities) which needs to be factored in for long term planning, as a significant negative item to come.

A parallel item is that most job creation doesn’t come from large enterprises, it comes from smaller companies. These companies have been hammered by the recession, and find it difficult to raise capital. These companies are also very likely to be impacted by items like the probably rise in estate taxes, and the continued increase in marginal tax rates, which reduce the payoff to match the significant risks taken by entrepreneurs. Minimum wages are higher, and any sort of employer mandate on health insurance will be a body blow that has to color any sort of hiring decision on the horizon.

The overall summary isn’t that I have the answers to the “job creation” conundrum; the summary is that at least I understand that jobs don’t “exist” independent of a need for labor by profitable enterprises that overcomes all the uncertainty, other options, and hurdles involved in this sort of decision in the current difficult business climate.

The NY Times apparently doesn’t understand that at all.