When testifying in 2010 before the Financial Crisis Inquiry Commission into the financial crash, then Federal Reserve Board Chairman Ben Bernanke recommended only one reference, Lords of Finance: The Bankers Who Broke the World (2009), presumably for the narrative that insufficient money printing in the aftermath of the Great War lead to the next one. Right idea, wrong narrative!

The US homeownership rate peaked at a rate well above the current level almost a half century ago mostly funded by a system of private mutual savings banks and savings and loans. The historical justification for federal “secondary market” agencies was political expediency – exemption from now obsolete federal, state and local laws and regulations inhibiting a national banking and mortgage market. Now government-run enterprises account for about 90% of all mortgages, with the Fed their primary funding mechanism, what the Economist recently labeled a de facto nationalization.

How did the private US housing finance system repeatedly go bankrupt? To quote Hemingway: Gradually, then suddenly. The two competing political narratives of the cause of financial market crises remain at the extremes – either a private market or public political failure – with diametrically opposite policy prescriptions. The politician-exonerating market failure narrative has not surprisingly dominated policy, with past compromises contributing to the systemic financial system failure, the global recession of 2008 and subsequent nationalization.

The Great Depression stressed the S&L system, but the industry’s vigorous opposition to both federal deposit insurance and the Fannie Mae secondary market proved prescient as the federally chartered savings and loan industry eventually succumbed by 1980 to the federal deposit insurer’s perverse politically imposed mandate of funding fixed rate mortgages with short term deposits and competition from the government sponsored enterprises.

The S&Ls were largely replaced by the commercial banks. To make banks competitive with Fannie and Freddie, politicians and regulators allowed virtually the same extreme leverage, in return for a comparable low-income lending mandate – CRA requirements leading to a market dominating $4 trillion in commitments to community groups to whom the Clinton Administration had granted virtual veto power over new branch and merger authority.

The Financial Crisis of 2008 and the aftermath

The Big Short by Michael Lewis and more recent movie portrayed not just banker greed but the extreme frustration of those shorting the US mortgage market stymied by a housing price bubble many times greater than any in recorded US history that refused to burst. The reasons: 1. the Fed kept rates low and money plentiful, and 2. whereas banks would have run out of funding capacity, the ability of Fannie and Freddie to continuously borrow at the Treasury’s cost of funds regardless of risk and their HUD Mission Regulator requirement to maintain a 50% market share kept the bubble inflating to systemic proportions.

Bernanke’s focus on choosing the narrative was useful, but the political choice of the market failure narrative appears to reflect convenience rather than conviction. The direct taxpayer costs of implicit or explicit public insurance and guarantees come with both a whimper – tax savings amounting to tens of billions annually due to the deductibility of interest costs – and a bang – future taxpayer bailouts generally delivered off-budget.

Monetary policies caused household savings to stagnate as returns to retirement savings evaporated. Defined obligation public pension funds were all rendered technically insolvent when funding is valued at current market returns rather than the assumed rate as much as ten times that. The failure of the economy to grow per capita was explained as the “new normal”. But politicians made no attempt to reflect the implied technically insolvency of public pensions or Social Security and Medicare.

Private firms fail, but private markets rarely do. Public protection and regulation makes firms “too big to fail” until markets fail systemically. The current and projected future public debt bubble is unsustainable, and financial markets will eventually ignore the accounting deceptions and pop it. The relative weakness of other sovereign debt is delaying the inevitably, making The Really Big Short a good title for a Michael Lewis’s sequel. Politicians and central bankers will again say “nobody saw this coming”. What then?

====
Kevin Villani, chief economist at Freddie Mac from 1982 to 1985, is a principal of University Financial Associates. He has held senior government positions, been affiliated with nine universities, and served as CFO and director of several companies. He recently published Occupy Pennsylvania Avenue on the political origins of the sub-prime lending bubble and aftermath. This article was originally published at FFE.org

Millennials cause homeownership rate to drop to lowest level since 1965:

The drop in homeownership is largely due to a delay in homebuying by the millennials, who have the lowest ownership rate of their age group in history. Millennials are not only burdened by student loan debt, but they have also delayed life choices like marriage and parenthood, which are the primary drivers of homeownership.

Why have today’s young people, as compared to young people in the recent past, delayed buying property, marrying and having children?

“While the millennial homeownership rate continues to decline, it’s important to note that the decrease could be just as likely due to new renter household formation as it is their ability to buy homes,” wrote Ralph McLaughlin, chief economist at Trulia. “Certainly low inventory and affordability isn’t helping their efforts to own, but moving out of their parents’ basement and into a rental unit is also a good sign for the housing market.”

Why are many of today’s young families choosing to rent rather than buy their homes?

Some time since (Oh, heck was it in 2005, ten years ago? So it was.) I mused on the concept of public space, both in the general sense – of a large city – and the smaller sense, of a neighborhood … that is, the place that we live in, have our gardens and our households, where we have neighbors who know us, where we jog, walk our dogs, take an interest – from the mild to the pain-in-the-neck over-interested and judgmental. If our homes are our castles, then the neighborhood is our demesne.
And unless we are complete hermits, home-owners will take an interest in the demesne. I state that without fear of contradiction, and it does not matter if that demesne is in a strictly-gated upper-middle or upper-class community with real-live 24-hour security, a private and luxurious clubhouse with attached pool and attractively-landscaped park or a simple ungated, strictly crisscrossed-streets and cul-de-sacs development of modestly-priced starter houses without any HOA-managed extras like golf courses, swimming pools, fitness centers, jogging paths – indeed, anything beyond a little landscaping around the sign denoting the entrance to the development. This is where our homes are, and at the lower end of the economic scale of things, likely to have consumed a major portion of disposable income on the part of the householder. A good portion of our material treasure, in other words, is committed to those foundation, walls, roof and yard.

In the 2007-9 real estate boom and debacle here in Chicago there was a wave of newly built condominiums that swamped the market in River North, River East, the South and West Loop, and even Downtown. For a while the new buildings could do no wrong and then that disappeared into a pool of foreclosures and difficult times for condominium associations as they had to deal with vacant units and those that refused or were unable to pay assessments. 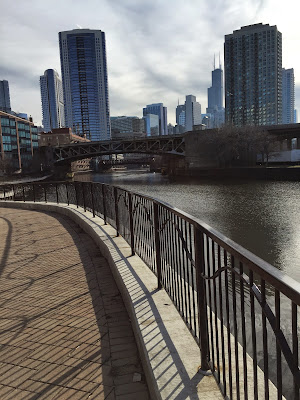 In the 2012-5 period, that same area of Chicago has seen an enormous influx in new buildings, but this time it is different – they all seem to be rental units. Everyone seemed to learn the same lesson; condominiums can be hard to unload in a down market and the prices are highly variable (units sold for fire-sale prices during the nadir and condominium developers lost their shirts if they were holding inventory during that time), so let’s go with renters instead, who derive consistent returns for the building owner and lender.

For a bit I even thought I’d try to put my condo on the market since prices have gone up. I figured I’d just rent for a while and not be exposed to future downturns. But as I looked around for equivalent value to my current condo in terms of location, views, bedrooms and bathrooms, I noted that I’d be paying $4500+ / month for an equivalent space, if I could find it at all (inventory of larger condos in modern buildings in good walkable areas was in fact very low). That just seemed crazy.

In River North, during the many years we’ve lived here, the skyline has been transformed with the addition of new high-rise buildings. Construction slowed after the 2008-9 crash, but is back now with a vengeance. A new apartment building is being built near my condominium. This is a view of the building while the construction workers were pouring concrete on the roof (you can see the concrete pouring arm) the same night of the “Derecho” storm which hit Chicago at the end of June. 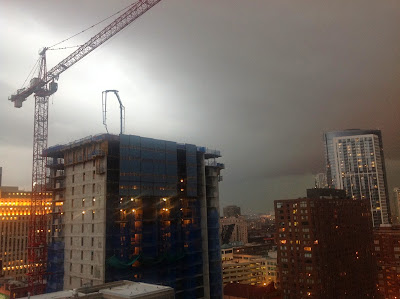 I’ve always wondered how they take down the crane and we got a chance to see it up close and personal. The process took all weekend, and they closed down a nearby street on Saturday and Sunday while they dismantled the crane. They put the metal “box” (it is steel colored) with three sides around a vertical crane “segment” and then the crane pulls that segment out through the gap. You can see the crane holding the segment if you look closely – which it then lowers to the ground. 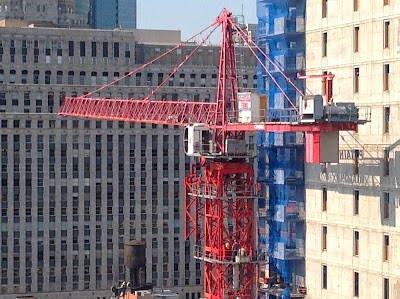