In beautiful downtown Goliad, Texas – on Courthouse Square, where Santa arrives promptly at 12:00 … mounted on a longhorn… accompanied by another longhorn – a spare mount, obviously. It’s a long way from the North Pole. 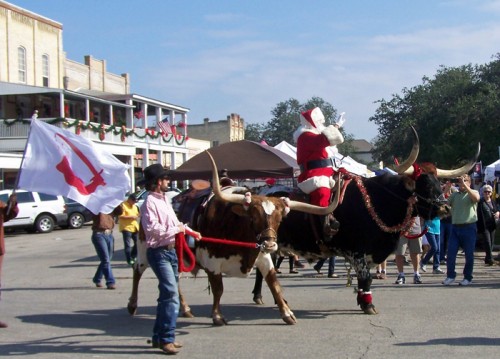 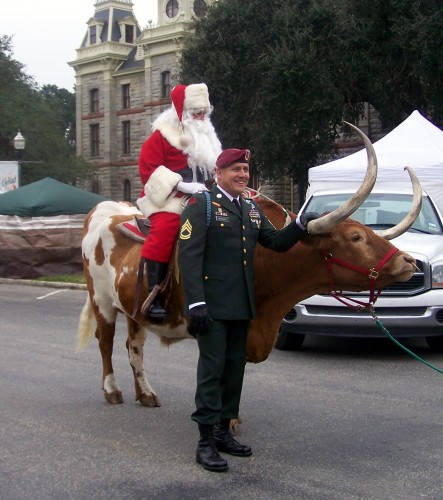 On a longhorn, with an Army escort. (Today in Goliad – where it was bitterly cold and so the crowd turnout was minimal, and chilled to the bone.)

Among one of the small stories that I remember hearing, or reading after the monster tsunami that struck South-East Asia on the day after Christmas several years ago was the one about the clouds of mental-health professionals, breathlessly hurrying in to offer grief and trauma counseling to the understandably traumatized survivors – only to discover that – well, most of them were getting along fine. And if not fine, at least reasonably OK, Yes, they were grieving, they were traumatized by all sorts of losses, their lives and livelihoods, their communities and their families had been brutally ripped apart, but a large number of the survivors seemed inclined to be rather stoic about it all. They seemed to be more interested in pulling up their socks, metaphorically speaking, and getting on with it. It appeared that, according to the story, their culture and religion predisposed them to a mind-set that said: the incomprehensible does indeed happen, wheel of life, turn of fate and all that, and when it happens, pull up your socks and get on with it.