(This piece was part of a much longer essay about life in Greece when I was stationed at Hellenikon AB in the early 1980s. I posted it originally on The Daily Brief, and also rewrote much later to include in a collection of pieces about travel, people and history for Kindle

Christmas in Greece barely rates, in intensity it falls somewhere between Arbor Day or Valentines’ Day in the United States: A holiday for sure, but nothing much to make an enormous fuss over, and not for more than a day or two. But Greek Orthodox Easter, in Greece – now that is a major, major holiday. The devout enter into increasingly rigorous fasts during Lent, businesses and government offices for a couple of weeks, everyone goes to their home village, an elaborate feast is prepared for Easter Sunday, the bakeries prepare a special circular pastry adorned with red-dyed eggs, everyone gets new clothes, spring is coming after a soggy, miserable winter never pictured in the tourist brochures. Oh, it’s a major holiday blowout, all right. From Thursday of Holy Week on, AFRTS-Radio conforms to local custom, of only airing increasingly somber music. By Good Friday and Saturday, we are down to gloomy classical pieces, while outside the base, the streets are nearly deserted, traffic down to a trickle and all the shops and storefronts with their iron shutters and grilles drawn down. 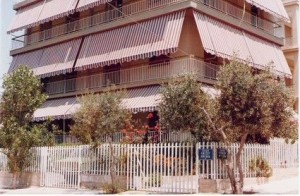