It’s easily missed. It’s part of the “small print” that most small-format paperbacks carry on the copyright page:

Here’s the picture that AQAP took of the copy of Dickens’ novel Great Expectations they inserted into one of their bombs recently – which they then published in issue 3 of their English language magazine Inspire: 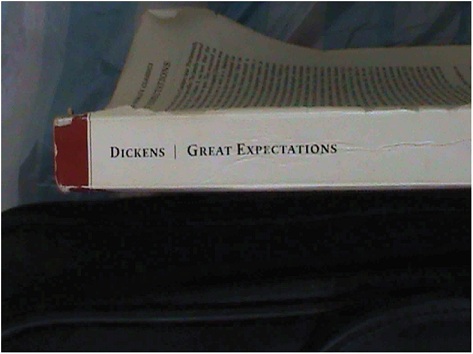 And here’s the explanation that accompanies that photo, in a piece titled “The Objectives if Operation Hemorrhage” by their “Head of the Foreign Operations Team”:

This current battle fought by the West is not an isolated battle but is a continuation of a long history of aggression by the West against the Muslim world. In order to revive and bring back this history we listed the names of Reynald Krak and Diego Diaz as the recipients of the packages. We got the former name from Reynald de Chatillon, the lord of Krak des Chevaliers who was one of the worst and most treacherous of the Crusade’s leaders. He fell into captivity and Salahuddeen personally beheaded him. The name we used for the second package was derived from that of Don Diego Deza, the Inquisitor General of the Spanish Inquisition after the fall of Granada who along with the Spanish monarchy supervised the extermination and expulsion of the Muslim presence on the Iberian Peninsula employing the most horrific methods of torture and done in the name of God and the Church. Today we are facing a coalition of Crusaders and Zionists and we in al Qaeda of the Arabian Peninsula will never forget Palestine. How can we forget it when our motto is: “Here we start and in al-Aqsa we meet”? So we listed the address of the “Congregation Or Chadash”, a Gay and Lesbian synagogue on our one of our packages. The second package was sent to “Congregation B’nai Zion”. Both synagogues are in Chicago, Obama’s city.
.
We were very optimistic about the outcome of this operation. That is why we dropped into one of the boxes a novel titled, Great Expectations.

They may not have read the book or seen the movie, as Ibn Siqilli comments at the link above, but they do have long memories and/or a taste for history, and they are indeed sending signals with small details like the fictitious names of their addressees.

This is in line with one of the basic premises of Islamic thought: that the world we inhabit is a world of ayat or symbols (the singular is ayah, and the word is also used to refer to the verses of the Qur’an, each of which is viewed as a symbolic utterance). Here, for instance, is a passage from Fazlun Khalid’s paper, Islam and the Environment, from the website of Jordan’s Royal Aal al-Bayt Institute for Islamic Thought:

The Qur’an refers to creation or the natural world as the signs (ayat) of Allah, the Creator, and this is also the name given to the verses contained in the Qur’an. Ayat means signs, symbols or proofs of the divine. As the Qur’an is proof of Allah so likewise is His creation. The Qur’an also speaks of signs within the self and as Nasr explains, “… when Muslim sages referred to the cosmic or ontological Qur’an … they saw upon the face of every creature letters and words from the cosmic Qur’an … they remained fully aware of the fact that the Qur’an refers to phenomena of nature and events within the soul of man as ayat … for them forms of nature were literally ayat Allah”. As the Qur’an says, “there are certainly signs (ayat) in the earth for people with certainty; and in yourselves. Do you not then see?” (Adh-Dhariat, 51:20, 21).

BTW, I don’t think Penguin (or, for that matter, Charles Dickens) got paid for that book… whatever their expectations may have been.