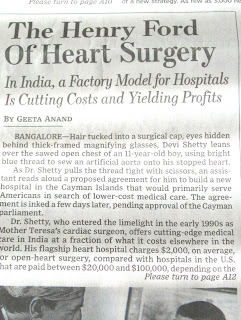 One of the biggest follies in the health care legislation is assuming that America is a “captive system” or a “closed system”. In these sorts of models (probably Hawaii is a good example) you can implement change and individuals don’t have a lot of choices and thus fees or taxes can be used to subsidize wholesale change.

The truth is much more complex; individuals are intelligent, many choices exist, and people respond to incentives. In addition, companies and even entire countries take different approaches to profit from opportunities that arise from these sorts of captive assumptions.

This article from the Wall Street Journal titled “The Henry Ford of Heart Surgery” analyzes a company in India that is pioneering economies of scale in heart surgery by 1) building huge facilities, 2) focusing on reducing all costs throughout the system from medical equipment to sutures, 3) hiring surgeons and having them perform the same types of complex surgery over and over to become experts on that specific task and 4) changing the hours of use and of doctors so that expensive medical equipment has a higher utilization rate which reduces the average cost / use.

This medical complex is already larger and performs more surgeries than their equivalent leaders in the US. The mortality rates also appear in line, although this is a difficult item to measure “apples to apples” (because it depends on how sick people are when they enter the facility).

Individual doctors at this facility also have performed the particular, complex and unique surgeries more times than their equivalents elsewhere; often surgeons do many types of surgeries rather than focusing on a single type because there aren’t enough patients with the exact same malady. As surgeons do the same procedure over and over, they get better at it and outcomes improve.

There is a GIANT productivity gap between services and manufacturing in the United States and around the world. Manufacturing often measures defects using 6 sigma, meaning one error for every 300,000 or so events; from my encounters with the medical system, I would say one error for every hundred or so events would be more probable (and this is optimistic). Not only are error rates higher, but utilization rates are poorer – giant facilities that are closed at night and on weekends, leaving expensive equipment idled. Huge overheads of staff and lavish offices and inefficient billing and tracking mechanisms exist (which often get squeezed out of cost-conscious manufacturers), and the absence of standardized procedures and methods is commonplace.

The funny thing is that hospitals and most of the service industry have been this way for so long that they don’t even realize that there IS a gap. Per an interview in the article:

My only issue with it comes from the fact that if you pursue wholesale volumes, you may give up something – which is usually quality

If you said this to a manufacturing expert they’d stare at you blankly; moving up to large scale production in a consistent and controlled manner will increase quality relative to doing something in small-batch scale in an independent manner. At least the article had the common sense to talk to others.

But Jack Lewin, chief executive of the American College of Cardiology says Dr. Shetty has done just the opposite – used high volumes to improve quality… surgeon Colin John, for example, has performed nearly 4,000 complex pediatric procedures known as Tetraology of Fallot in his 30-year career. The procedure normally repairs four different heart abnormalities at once. Many surgeons in other countries would never reach that number of any type of cardiac surgery in their lifetimes.

As far as machinery, the article notes that expensive pieces of equipment are used 15-20 times a day, at least 5 times more than in an American hospital.

The company described in the article is planning on opening a large hospital in the Cayman Islands, an hour’s flight from Miami, intending to attract Americans looking for elective procedures or self-insured. There is a large profit in this sort of activity, assuming it is well planned-for and efficiently run.

Our debate on the medical bill is stifled by having the wrong goal – universal access. This sort of access to our small-scale and inefficient medical sector will just cause costs to soar and break the public purse.

Not that it would ever happen, but a better model would be to break down the current inefficient small-scale model and build an efficient public model from the ground up, probably based on the VA model but also consolidating procedures, utilizing equipment more efficiently, and cutting costs throughout the system. In parallel, a private system would rise up for those who want to opt out for more customized or personalized care.

The reality is that you can’t mandate what people do for their children, or in life-or-death situations. Public schools exist everywhere, but many / most people with opportunities to avoid it don’t send their kids to those schools where the schools are poor. People move when neighborhoods get bad; you can’t mandate that people live in Detroit or Cleveland (the city proper); thus problems there compound and spiral.

If the government really takes everything over then there will be giant opportunities for offshoring medical care – don’t want to wait in line? Leave. And if the system wants to tax everyone as a percentage of income to pay for medical insurance, then the wealthy will have a huge incentive to leave since the actual cost of medical bills (ignoring the subsidization of others) is far lower than what they’d pay if a 10% surcharge was put on their income all the way up.

It is sad that America, a nation of invention and entrepreneurs, is being passed up by others in the area of structural medical innovation. Certainly government intervention on a large scale will only make the problem drastically worse.