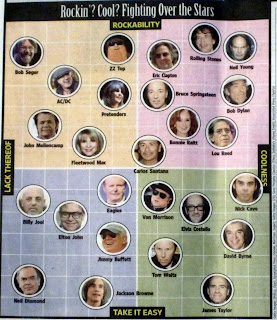 A recent WSJ article about Tom Petty and how he is perceived relative to his rocking “peers” caused me to instantly grimace thinking about the time a couple of years ago when I saw The Strokes open for Tom Petty in Chicago at Northerly Island and The Strokes just blew Petty off the stage. We left after a couple of Petty’s songs… it was about as exciting as watching paint dry.

Well then the WSJ put together a matrix ranking Petty’s peers that made me almost throw up in my mouth a bit. Everyone on that list was ancient, and very few were even creating new music anymore (or at least music that anyone was listening to). Of the individuals on the grid I wouldn’t even cross the street to see 90% of them for free. And this is “rock”? 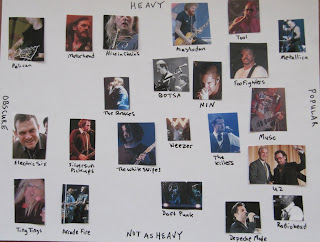 Note – if you want to see this grid in full scale click on the original post over at LITGM and blow it to full size.

So I decided to make my own grid of actual rock music out today, with bands that are actually touring and still putting out new music that is at least somewhat relevant. I’ve seen lots of these bands at Lollapalooza, for which I already bought my 2010 tickets. That WSJ list of “rockers” shows the worst of music – aging nostalgia shows and useless crap. But there is a lot of stuff still going on, and a few of the old war horses constantly re-invent themselves. I had to put that grid together just to get the thought of those old fogies pushing stuff into the ground out of my mind.

17 thoughts on “WSJ and Music”