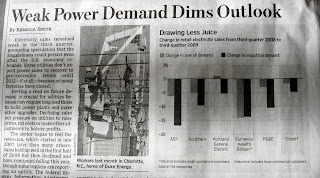 Over the long term, electricity use has been closely correlated with the general growth in the economy. Due to the fact that building power stations, transmission lines and siting locations for distribution facilities has a long lead time (sometimes measured in decades), utilities have to plan ahead.

This latest recession has caused industrial usage to plummet to an unprecedented degree. The article above was in the Wall Street Journal titled “Weak Power Demand Dims Outlook“. Per the article:

Electricity sales remained weak in the third quarter, prompting speculation that the sluggishness could persist even after the U.S. economy rebounds. Some utilities don’t expect power sales to recover to pre-recession levels until 2012 — if at all — because so many factories have closed.

Some of the major utilities, such as AEP out of the midwest and Southern Company in the Southeast are seeing demand reductions for industrial use in the 15-20% range. These types of reductions are out of the historical norm for a recession.

While industrial demand is falling primarily because of a decline in industrial activity, consumer and household demand has been falling (at a much slower rate) due to a heightened customer awareness of electrical usage and also the recessionary impact on individuals.

Both of these trends will effectively put a halt on any major new generation investment in the short and medium term, I predict. If the utilities were able to run before, and 20% of their industrial capacity is gone, this will buy them a lot of time to defer costly improvements. It is true that a reduction in industrial demand doesn’t necessarily translate into a corresponding reduction in “peak” demand, since many industrial users are on “interruptible” contracts already which allow them to cycle down on peak residential days (i.e. the hottest or coldest days of the year, depending on how the local market is configured), but it does represent a significant reduction.

Thus I would say that the recession has helped us to dodge a bullet as far as electricity supply goes. Companies will be able to linger on without new generation for a while longer since incremental demand has evaporated.

Along with recent reductions in the price of natural gas caused by new drilling technologies, which makes comparatively easy-to-site natural gas plants even more cost competitive with coal and nuclear plants, it seems even more remote that new coal or nuclear base load will be built except in rare circumstances. Whatever is built is unlikely even to make up for what is going out of service due to age and obsolescence. Without significant increases in demand projected, and with the prices of electricity down as a result, new capacity coming on line will likely be severely limited.

3 thoughts on “Power and Demand”