A while back I was in Sedona and took the Verde Canyon Railroad. This railroad was for mining but now is a popular tourist attraction. Here is a link to their web site. From the site:

The railroads of north central Arizona were all built to support Arizona’s richest copper mine located in Jerome, in the Mingus Mountains above Clarkdale. The Verde Canyon Railroad (formerly the Verde Valley Railroad, operated by the Santa Fe, Prescott & Phoenix Railroad,) was financed by Senator William A. Clark for $1.3 million dollars in 1911. Built miraculously in only one year, the 38-mile, standard gauge line from Clarkdale to Drake, AZ was constructed by 250 men using 200 mules, picks and shovels and lots of DuPont black powder explosives. Today, the same railroad would cost in excess of $40 million to build.

As always, I marvel at how fast these types of operations used to be built, in the days before government and lawyers strangled the life out of everything. I also doubt their “$40 million” figure, because you probably can’t build much of anything and get the permits to do so within our lifetime (the train line runs near a bald Eagle nest, which probably makes it impossible to construct anything). 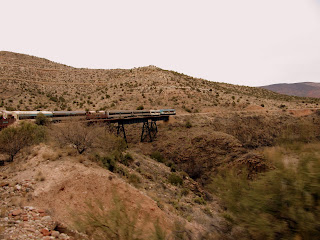 If you have kids I really recommend this trip. It is not quite as good as the railway in Skagway, Alaska that I reviewed here but it still is a great trip (and a lot more accessible than Alaska). The trip is also fun because it is a bit of a “booze cruise” and they serve (OK) food but have a variety of alcoholic beverages and decent beers and local wines to choose from. Due to this on the way back (it is about 4 hours round trip) most of our rail car was snoozing. We also went in a first class car which I’d recommend – it was a bit more but the food / drink was better and it was roomier. You can also rent the caboose if you have a small party which sounds cool, too.

At this link you can see 2 videos from the trip:

1) in the tunnel – be sure to keep your hands in the car! It is fun in the darkness because there are no lights in the tunnel
2) changing of the engines – at Perkinsville they change the engine so that they move from the rear of the train to the front, it is cool because you can see them up close as they chug by