Wind power, like nuclear power, has incorrectly been described as a key part of the solution to electric generation in the USA. T Boone Pickens, the famous wildcatter, had a plan to develop large wind generating plans across the central US. Back in mid-2009 he folded his tent, noting that there wasn’t any prospect of building transmission lines to bring wind power from where the wind is best to the cities where the demand resides, as I noted here. Anyone remotely familiar with the actual capabilities of financing transmission nowadays knew it was a fools errand, since routing a transmission line literally takes over a decade of permitting and routing is often very inefficient, such as in this case. 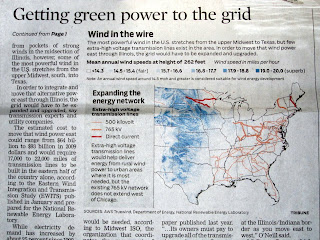 The Chicago Tribune finally awoke to this situation in a decent article in the Sunday paper, titled “Putting Wind Generated Power Where It Is Needed“.

In the near term, companies are opting to harness wind power closer to existing transmission lines, usually near urban areas, to avoid the lengthy and costly process of building new lines. Aside from pockets of strong winds in the midsection of Illinois, however, some of the most powerful wind in the U.S. stretches from the upper Midwest, south, into Texas.

In order to integrate and move that alternative power east through Illinois, the grid would have to be expanded and upgraded, say transmission experts and utility companies.

The estimated cost to move that wind power east could range from $64 billion to $93 billion in 2009 dollars and would require 17,000 to 22,000 miles of transmission lines to be built in the eastern half of the country alone, according to the Eastern Wind Integration and Transmission Study (EWITS) published in January and prepared for the National Renewable Energy Laboratory.

The Chicago Tribune even included a nice graphic that is in the post above; it clearly shows where the prime wind territory resides (west of the population centers in the Midwest) and the lack of transmission to bring this power to market.

“In many instances, interconnection studies indicate that adding a new power plant would overload transformers and transmission lines hundreds of miles away,” the American Wind Energy Association and the Solar Energy Industries Association concluded in a white paper published last year. “…Its owners must pay to upgrade all of the transmission equipment, often at a cost approaching or exceeding the cost of the power plant itself.”

While the journalist at the Chicago Tribune has finally stumbled upon the truth, which is that the best territory for wind generation is not located near population centers AND the cost and time of setting up the transmission grid far surpasses any reasonable possibility that this would reasonably occur, the writer fails to reach the logical conclusion of the situation, which is:

WIND GENERATION IS NOT A VIABLE SOLUTION IN THE MIDWEST BECAUSE THERE IS NO TRANSMISSION GRID TO DELIVER THE POWER, AND THERE IS NO REASONABLE POSSIBILITY THAT WE WILL DEVELOP THE GRID OVER THE NEXT FEW DECADES.

Thus, the reasonable conclusion is, we ought to stop talking about wind power in the Midwest and move on to more practical options.

Too bad that isn’t going to happen and journalists are going to keep talking about wind power like it is viable, because they don’t know any better, and most readers will keep reading it as if it’s true.

20 thoughts on “Waking Up That Wind Isn’t The Solution”