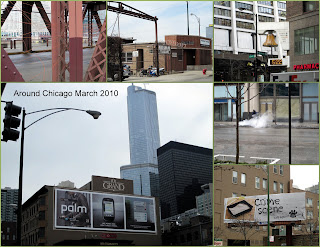 Recently I took a few photos around Chicago of things that caught my eye.

Upper left – someone started an impromptu art project by putting orange string on the bridges across the Chicago River.

Upper right – a strange bell that shows the weather; unfortunately it seems to be stuck on “colder”. Maybe this is the “misery bell” because this spring has been lousy…

Lower middle – I recently saw a guy trying to steam the junky, dirty snow off the street. This was new to me. Unfortunately he just gave up and started chipping away with a shovel and put it into the street, old school-style

Lower center – there is a big “Palm” advertisement with Trump Tower in the background. I remember when I bought my first palm pilot, probably a decade ago, and Palm was “cool”. Recently a stock analyst put a price target of ZERO on Palm’s common equity for their stock price… um that’s not good. But at least they can afford an expensive billboard

Lower right – another new billboard appeared in the neighborhood – this one is for “Cats Against Clay“. Apparently kitty litter is bad for cats. Or the price of a billboard is now so low that anyone can rent one. Perhaps one for LITGM, or Chicago Boyz?

4 thoughts on “Around Chicago”