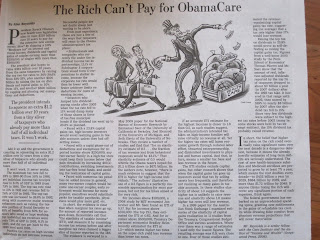 On the opinion page at the Wall Street Journal Alan Reynolds of the Cato Institute wrote an excellent article titled “The Rich Can’t Pay for ObamaCare“.

The key concept is what he describes as “the elasticity of taxable income” or ETI. ETI measures how taxable income is impacted as tax rates increase; if you use a rate of 0.5 you assume that an increase in tax rates that would yield $1 if prior behavior held stead would yield 50 cents after the impact of behavioral changes is taken into account. However, instead of an ETI of 0.5, per the article:

For incomes above $500,000, Treasury Department economist Bradley Heim recently estimated the ETI at 1.2 – which means that higher tax rates on the super-rich yield less revenue than lower tax rates.

The article describes, in practical terms, how rich individuals can take action that illustrates this ETI:

– dump dividend paying stocks (you will probably want to do this anyways because they are likely to fall in price because part of their value is tied to the reduced tax rate) when the 15% rate is raised
– avoid selling stocks with capital gains when the rate rises, or sell stocks with unrealized losses at the same time to “net out” any gains owed to the government
– reducing income near the $250k range when “phase outs” raise the MARGINAL tax rate to a very high rate through tax deferral strategies such as 401(k) contributions and the like
– consider becoming a one-earner couple instead of a DINK if the penalty on incremental income becomes too great to make up for the cost of child care and the general decremented quality of life

Punitive tax rates on high-income individuals do not increase revenue. Successful people are not docile sheep just waiting to be shorn.

A sound tax policy has two main elements 1) it raises the amount of revenue that it is supposed to raise 2) it provides the minimal distortion of productive economic activity.

Super high tax rates on the rich accomplish neither of these two attributes. They don’t raise the money as planned (in fact you could likely end up with LESS money overall) and they distort the economy by having our most valuable members of the economy step back from working at a time when their entrepreneurial drive is needed most to jump-start the economy.

14 thoughts on “Taxes and the Rich”