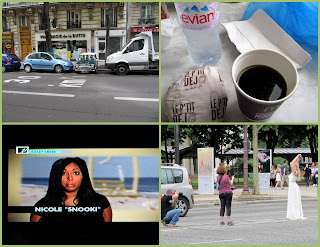 In the upper left you can see one of the original “mini” cars parked in a way that only a mini can.  That McDonald’s in the upper right was a “large” coffee… not large enough for me.  We watched “Jersey Shore” with French language overdubs – can you believe that someone in France wakes up in the morning with the official job of translating “Snooki”?  In the lower right there was a model right in the middle of the busiest street, doing a photo shoot. 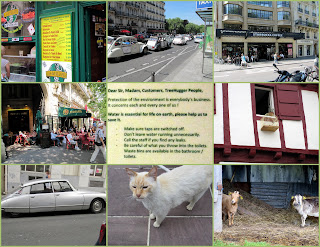 Upper left – the place advertises itself as Lenny Kravitz’s favorite falafel stand.  I saw a line of the old Citroen convertibles out for a weekend drive.  Starbucks had people sitting outside like a French cafe.

This one is for our friend Gerry from Valparaiso Indiana.  There is a cafe chain in Paris called “Indiana Cafe” and they serve Tex-Mex food, check out their site, and no I can’t figure out the connection, either.  In the middle the translation for environmentalists was “tree hugger”, an excellent translation.  They had a bird cage outside the window, which seems like a big tease.

In the lower left is one of those cooler old French cars with the rear wheel covered and I hope you don’t have to change the tire.  We had a very friendly cat follow us and apparently a goat with goiter.

9 thoughts on “Fun In France”