On Okinawa, in the north heavy fighting continues on the Oroku peninsula.

In the south, the US 24th Corps prepares to attack Mount Yaeju.

On Okinawa, the Japanese forces defending the Oroku peninsula are cut off and surrounded by forces of the US 6th Marine Division.

The US 1st Marine Division advance southward to Kunishi Ridge, one of the last Japanese strong points.

On Okinawa, fighting continues on the Oroku Peninsula, where the forces of the US 6th Marine Division have reduced the Japanese pocket to about 2000 square yards. Heavy Japanese losses are recorded in nighttime counterattacks.

Meanwhile, on the south of the island, the US 1st Marine Division suffers heavy losses in the successful capture of a hill west of the town of Yuza.

The US 24th Corps forces, to the left, launches a major offensive against the last Japanese defensive line, the Yaeju-Dake Line. Japanese resistance is evidently weakening. 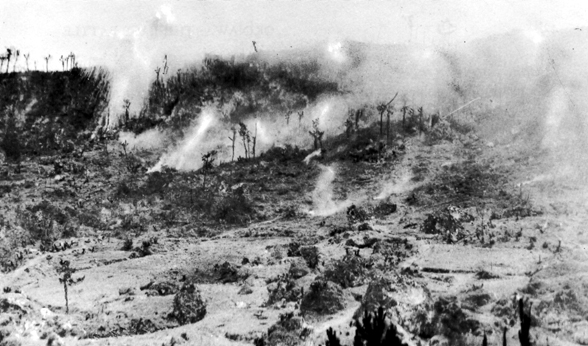 YAEJU-DAKE was brought under American artillery fire shortly before the infantry attempted its first advance to the escarpment. Burst at upper left is white phosphorus.

On Okinawa, the Japanese pocket in the Oroku Peninsula has been reduce to perimeter measurable in yards but their resistance remains fanatical.

An assault by the US 1st Marine Division (US 3rd Amphibious Corps) fails to capture Kunishi Ridge.

A regiment of the US 96th Division reaches the town of Yuza but is forced to withdraw by intensive Japanese fire.

An important height east of Mount Yaeju is capture by American forces.

Each of the three M4 Sherman “POA-CWS- “75” – H1″ companies in the 713th Provisional Flame Thrower battalion were equipped with 200 feet of rubber lined US Navy fire hoses that had been modified to run off the napalm pumps connected to the 290 gallon napalm tank in each Sherman. At the end of these fire hoses was a M2-2 flame thrower assembly that allowed the pumped napalm to be ignited.

In the first action with this device, five Shermans were driven to the base of a cliff and several hundred feet of hose were connected to allow reverse slope Japanese cave positions to be treated with flame. All five Shermans were exhausted of fuel by the end of this action and many Japanese soldiers were killed either by flame or by gunfire as they fled death by napalm.

This innovation was requested based on combat reports and feedback from the Sept-Oct 1944 assault on Peleliu using flame throwing Marine LVT4. The large vehicle mounted flame throwers were very useful, but could not reach many Japanese cave or pillbox positions just out of range in rough terrain.

The fire hose extention solved this problem, and Okinawa is where this innovation was first used.