On Okinawa, the Japanese headquarters on Hill 89 is taken by the forces of the US 32nd Infantry Regiment, part of US 7th Division. The body of General Ushijima, commanding the Japanese 32nd Army is found nearby.

Several Kamikaze slip through and strike ships at the at the Kerma Ritto anchorage. Sea Plane tenders Kenneth Whiting and Curtis are both struck and the Curtis is heavily damaged by fire.

LSM-59 is hit and sunk towing the hulk of the decommissioned USS Barry, which is also sunk in the same attack. The Barry’s new mission was to be a kamikaze decoy, for which it succeeded sooner than intended. 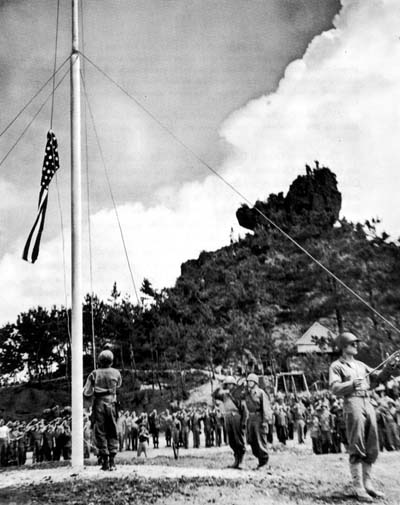 RAISING THE AMERICAN FLAG on 22 June denoted the end of organized Japanese resistance.

The US Navy suffers a suicide strike on LSM-213 at Kimmu Wan. The landing ship suffers heavy structural damage with three killed and 10 wounded.

Radar Picket Station 15, with USS Massey and USS Dyson present, is heavily attacked, but the fighter cover killed 29 out of an estimated 40 attackers without damage to either ship.

On Okinawa, the battle with organized ground forces has ended. The 10th Army starts a 10 plan to mop up remaining unorganized Japanese ground forces.

In the air, the American forces have lost 763 planes.

For the first time in the war, there are a relatively large number of Japanese prisoners: 10,755.

Including today’s suicide strikes, the US Navy had 36 ships sunk and 368 damaged by the end of the Okinawa campaign.

Okinawa Background — The Death of Generals Ushijima and Cho

The following is from OKINAWA:THE LAST BATTLE by Roy E. Appleman, James M. Burns Russell A. Gugeler, and John Stevens

General Ushijima radioed his last message to Imperial Headquarters on the evening of 21 June. The impetuous General Cho made a last appeal for all units to fight to the utmost. He also prepared several messages which he hoped his secretary could eventually deliver in Japan. “Our strategy, tactics, and technics,” he explained, “all were used to the utmost and we fought valiantly, but it was as nothing before the material strength of the enemy.” 28 Realizing that they could hold out no longer, Generals Ushijima and Cho made ready for death. Their cook prepared an especially large meal to be served shortly before midnight. When the meal was finished, the two generals and their staff drank numerous farewell toasts with the remaining bottles of Scotch whisky which had been carried from Shuri. The rest of the story is told by a prisoner who learned the details of the death of Ushijima and Cho from other prisoners:
.
Alas! The Stars of the Generals have fallen with the setting of the waning moon over Mabuni . . . .
.
The pale moon shimmers bluish white over the waters of the southern sea, but on Hill 89 which juts abruptly from the reefs, the rocks and boulders are dyed crimson by the blood of the penetration unit which, with burning patriotism, rush the American positions for the last stand. The surrounding area displays a picture of concentrated fireworks; bursts of naval gun fire, flashes of mortar and artillery fire, to which is added the occasional chatter of machine guns . . . .
.
Gathered around their section chiefs, members of each section bow in veneration toward the eastern sky and the cheer of “long live the Emperor” echoes among the boulders . . . .
.
The faces of all are flushed with deep emotion and tears fall upon ragged uniforms, soiled with the dirt and grime of battle . . . .
.
Four o’clock, the final hour of Hara-kiri; the Commanding General, dressed in full field uniform, and the Chief of Staff in a white kimono appeared . . . . The Chief of Staff says as he leaves the cave first, “Well, Commanding General Ushijima, as the way may be dark, I, Cho, will lead the way.”
.
The Commanding General replies, “Please do so, and I’ll take along my fan since it is getting warm.” Saying this he picked up his Okinawa-made Kuba fan and walked out quietly fanning himself . . . .
.
The moon, which had been shining until now, sinks below the waves of the western sea. Dawn has not yet arrived and, at 0410, the generals appeared at the mouth of the cave.
.
The American forces were only three meters away [sic.].
.
Four meters away from the mouth of the cave a sheet of white cloth is placed on a quilt; this is the ritual place for the two Generals to commit Hara-kiri. The Commanding General and the Chief of Staff sit down on the quilt, bow in reverence towards the eastern sky, and Adjutant J. respectfully presents the sword. Finally, the time for the honored rites of Hara-kiri arrives.
.
At this time several grenades were hurled near this solemn scene by the enemy troops who observed movements taking place beneath them.
.
A simultaneous shout and a flash of a sword, then another repeated shout and a flash, and both Generals had nobly accomplished their last duty to their Emperor . . . .
.
All is quiet after the cessation of gunfire and smoke; and the full moon is once again gleaming over the waves of the southern sea. Hill 89 of Mabuni will live in memory forever.29