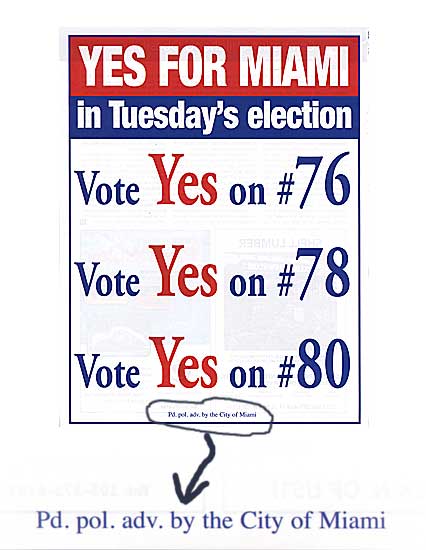 This kind of shit should be illegal if it isn’t already. It’s certainly unethical, though I’m sure it goes on everywhere. These guys are always whining about under funded this and that, but somehow there’s enough to spare for lobbying on the taxpayers’ dime.

Oh, do you want to know what these terribly important ballot items would do?

– #76 would effectively extend for 15 years the city’s current lease, to a restaurant, of a parcel of waterfront having one of the best views in town. Nothing wrong with that in principle, and the restaurant would be required to make substantial capital improvements, but you have to ask why the city doesn’t just sell the land to the highest bidder, and use the proceeds to cut taxes or retire debt, instead of staying in the property-management business. Because what usually happens in these situations is that the city managers, who don’t have any profit incentive (much less risk of missing meals if they screw up), give away the store to the people they’re doing “business” with. Which brings us to the next provision of this ballot item: the city would provide, as part of the package, two consecutive five-year renewal options for the lease. In other words, the restaurant gets an option to lock in, for the next twenty-five years, a lease deal that it will probably amortize within the period of the initial lease, if not earlier. Then the restaurant gets another ten years at lease rates determined long before anyone could possibly predict the real-estate values that will be current then. Not much risk for the restaurant, but the taxpayers stand to forgo a great deal of revenue if land and lease values go up. (The restaurant is adjacent to large tracts of run-down municipal land that can probably only increase in value.)

– #78 would increase the annual salaries for county commissioners, who currently are paid at a part-time rate of about $6k per year, to $58k per year. So instead of spending most of their time with their law practices, commissioners will now be paid to spend more time spending their constituents’ money.

– #80 is a parking-tax increase. (It’s framed as a “continued parking surcharge.”)

Remind me again who, besides pols and bureaucrats and their business cronies, benefits from passage of these measures.

UPDATE & CORRECTION: The raise specified in ballot item 78 is for city rather than county commissioners. It passed, as did the other two ballot measures.

3 thoughts on “Your Tax Dollars At Work”