Previous posts in this series: I, II, III. 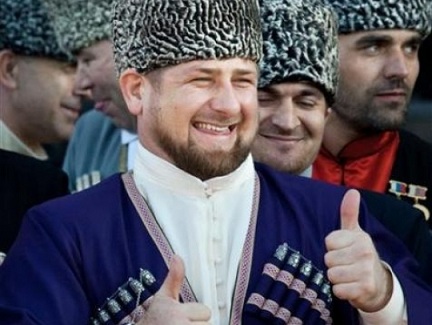 Eyewitnesses have said men in camouflage, often worn by police and security forces in the volatile region, fired paintball guns from cars about a dozen times last month at women who were not wearing headscarves.

“I don’t know (who they are), but when I find them I shall announce my gratitude,” Ramzan Kadyrov said in a weekend interview on state-run regional television channel Grozny, according to a Reuters translation of the remarks in his native Chechen.

The attacks highlighted tension over Kadyrov’s efforts to enforce Muslim-inspired rules that in some cases violate Russia’s constitution.

Here’s a BBC version of the same story:

Since June, unidentified men with paintball guns have driven round the centre of Grozny shooting at women with uncovered heads. Leaflets were pinned on doors and scattered on the pavements which urged women to dress more modestly or face the consequences:

“Today we have sprayed you with paint, but this is only a warning!!! Don’t compel us to have recourse to more persuasive measures!”

On state television, Mr Kadyrov said he did not know who was responsible for the attacks, but added: “When I find them, I will express my gratitude.”

I’m interested in the various ways that (what might otherwise be called) a game can morph into war.

Clearly, a game can be training for warfare, as exemplified by Mao’s study of Go. It can serve, as did the Fisher-Spassky title match in Reykjavik, as a “continuation of war by other means”. In this case, in Chechnya, paintball appears to be functioning as a warning – a shot across the bows, so to speak.

Are there other significant possibilities?

4 thoughts on “Games of War and Peace: IV”