Dan and I went to the Illini at Wrigley yesterday and it was a lot of fun. I obtained these tickets by purchasing four end-zone season tickets from Northwestern for $384, which allowed me to buy up to 8 seats for this game. An excellent trade, especially because I took my parents to the Northwestern home opener (they are alumni) and others had a great time with the Iowa game and my brother took his son to the Purdue game and toured the campus.

I thought there might by a fly-over so I recorded the end of the national anthem, sung by Blackhawks singer Jim Cornelison, which was great. There was no fly-over but here is the video nonetheless which gives a good feeling for how close we were to the action on the field.

We were in the end zone that the offense played away from because of the bleacher walls. This didn’t impact the game as badly as we thought it might; we did see some cool drives that started deep in their own territory as well as the TD return by Northwestern. At that point it was obvious how many Northwestern fans were in the seats relative to Illini fans; they were the clear majority. The seats were absolutely right by the field which was fantastic for us and we really liked the view. 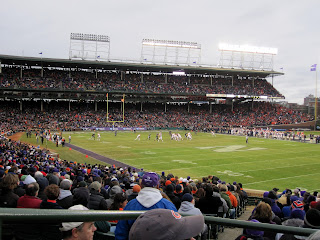 The manual score board was kind of a hoot with football games from Big Ten teams up there. 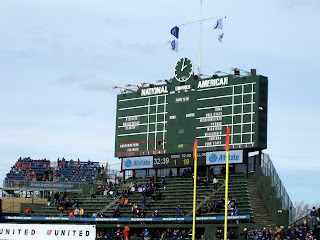 I was surprised to see the Wrigley marquee painted purple. Northwestern did a really nice job with the stadium, even putting up banners for their hall of fame and famous players. 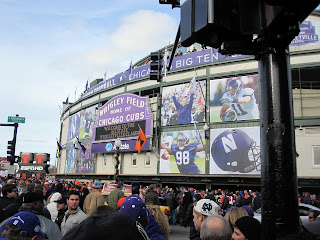 ESPN Game Day was across the street but I couldn’t get any good pictures of that because it was a mob scene and we watched most of the action from inside a nearby bar by the time Ditka got on TV.

All in all a great time; Wrigleyville was ROCKING after the game; it was like a Cubs playoff game or something in the fact that every bar was absolutely packed to the gills and people were everywhere on the streets. We also were lucky in that the weather was decent and it wasn’t raining because that takes the fun out of everything.

4 thoughts on “Illini At Wrigley Field”