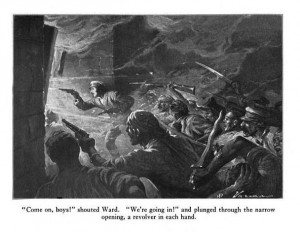 Through an English friend in the Chinese service, Ward obtained an introduction to Wu, the Taotoi of Shanghai, and to a millionaire merchant and mandarin named Tah Kee. The plan he proposed was as simple as it was daring. He offered to recruit a foreign legion, with which he would defend Shanghai, and at the same time attack such of the Taiping strongholds as were within striking distance, stipulating that for every city captured he was to receive seventy-five thousand dollars in gold, that his men were to have the first day’s looting, and that each place taken should immediately be garrisoned by imperial troops, leaving his own force free for further operations. Wu on behalf of the government, and Tah Kee as the representative of the Shanghai merchants, promptly agreed to this proposal, and signed the contract. They had, indeed, everything to gain and nothing to lose. It was also arranged that Tah Kee should at the outset furnish the arms, ammunition, clothing, and commissary supplies necessary to equip the legion. These preliminaries once settled, Ward wasted no time in recruiting his force, for every day was bringing the Taipings nearer. A number of brave and experienced officers, for the most part soldiers of fortune like himself, hastened to offer him their services, General Edward Forester, an American, being appointed second in command. The rank and file of the legion was recruited from the scum and offscourings of the East, Malay pirates, Burmese dacoits, Tartar brigands, and desperadoes, adventurers, and fugitives from justice from every corner of the farther East being attracted by the high rate of pay, which in view of the hazardous nature of the service, was fixed at one hundred dollars a month for enlisted men, and proportionately more for officers. The non-commissioned officers, who were counted upon to stiffen the ranks of the Orientals, were for the most part veterans of continental armies, and could be relied upon to fight as long as stock and barrel held together. The officers carried swords and Colt’s revolvers, the latter proving terribly effective in the hand-to-hand fighting which Ward made the rule; while the men were armed with Sharp’s repeating carbines and the vicious Malay kris. Everything considered, I doubt if a more formidable aggregation of ruffians ever took the field. Ward placed his men under a discipline which made that of the German army appear like a kindergarten; taught them the tactics he had learned under Garibaldi, Walker, and Juarez; and finally, when they were as keen as razors and as tough as rawhide, he entered them in battle on a most astonished foe.

From Gentlemen Rovers by E. Alexander Powell (1913), chapter entitled “Cities Taken by Contract” about Frederick Townsend Ward and the Ever Victorious Army during the Taiping Rebellion. After Ward’s death, the Ever Victorious Army was led on to victory by Charles “Chinese” Gordon. (The title of Powell’s book is based on the poem The Lost Legion by Rudyard Kipling.) See also The “Ever Victorious Army”: A History of the Chinese Campaign under Lt.-Col. C.G. Gordon, C.B., R.E., and of the Suppression of the Tai-Ping Rebellion by Andrew Wilson (1868).

UPDATE: Reading the Wilson book, I found this excellent paragraph, about the death of the Emperor, who had suffered both the Taiping rebellion as well as foreign invasion, culminating in the destruction of the Summer Palace, and unremitting disaster throughout his reign:

About this time some events occurred at Peking which had a not unimportant bearing on the future of China and of Tai-pingdom. On the 21st August the Emperor Hien-fung died at the Jehol, his hunting-seat in Tartary, in the 26th year of his age and the 11th of his reign. Unequal to the difficulties of a transition period, he had, like many other rulers similarly placed, sought consolation in sensual indulgences, and had allowed himself to be led by unworthy favourites. At last, as the decree announcing his death stated, “his malady attacked him with increasing violence, bringing him to the last extremity, and on the 17th day of the moon he sped upwards upon the dragon to be a guest on high. We tore the earth and cried to heaven, yet reached we not to him with our hands or voices.” When the mortal shell of this frail and unfortunate monarch was laid in its ” cedar palace,” his spirit ascending on the dragon would have many strange things to tell to the older Emperors of his line. He would have to speak of trouble, rebellion, and change through all the years of his reign, over all the vast plains of the Celestial Empire, from the guttural voiced tribes of Mongolia and the blue-capped Mohammedans of Shensi, down to the innumerable pirates of Kwangtung; he might complain that, east and west, north and south, his people had been disobedient and rebellious; the administration of his empire had been set at defiance, and his sacred decrees had been imperfectly carried out by weak and corrupt viceroys, much more intent upon their own aggrandisement than upon the welfare of the people. Year after year great bands of marauding rebels had moved across the once happy Flowery Land, marking their progress in the darkness of night by the glare of burning villages, or shadowing it in the day by the rolling smoke of consuming towns. A maniac usurper had not only sought to ascend the dragon throne, but had nearly done so, and had claimed divine honours; while invading armies of the outside barbarian had humiliated the empire, had visited the once inviolate city of Peking, and had burned the palace of the Son of Heaven.

Woe unto poor China, and her unhappy Emperor. A vivid and tragic depiction of the destruction of the Summer Palace, mentioned here, can be found in How We got into Pekin: A Narrative of the North China Campaign of 1860 by The Rev. R.J.L. M’Ghee (1862), which is a very worthy book.

19 thoughts on “The Birth of the Ever Victorious Army”