I think of how the Mezquita, once a mosque, must have looked when its whole floor was a single, arched space of prayer: 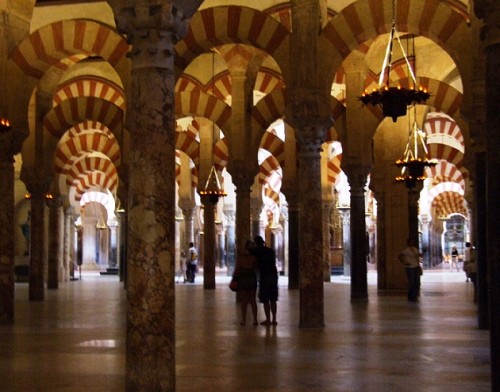 before Moorish Cordoba was conquered, and the conquerors built a cathedral in the very heart of the place: 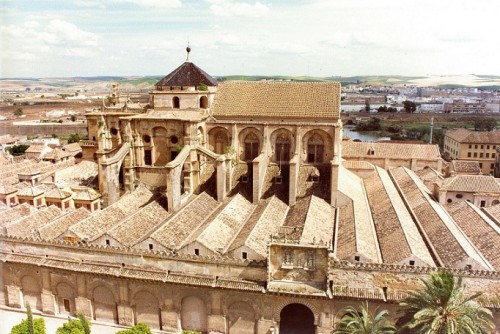 like the petals of a flower opening inside the sepals, or a cancer sprouting within the body – for so much depends on your understanding of prayer.

And I think how lovely it still looks, cathedral nestled within mosque under the snow, to this photographer’s eye:

And I think of Seymour Hersh, who has drawn flak for comments in a recent speech about the Bush war in Iraq, and Obama’s continuation of Bush policies – and here’s the part that caught my eye:

“In the Cheney shop, the attitude was, ‘What’s this? What are they all worried about, the politicians and the press, they’re all worried about some looting? … Don’t they get it? We’re gonna change mosques into cathedrals. And when we get all the oil, nobody’s gonna give a damn.'”

“That’s the attitude,” he continued. “We’re gonna change mosques into cathedrals. That’s an attitude that pervades, I’m here to say, a large percentage of the Joint Special Operations Command.”

And I think then of the great cathedral of Hagia Sophia in Constantinople, that was conquered and became a mosque:

and is now a museum. So these things go, in times of war.

As for the Mezquita, its history is more complex than I have suggested: it was first a pagan temple, then a Christian church, then shared between Muslims and Christians, then made into a mosque, then a church again – and the cathedral as we see it today was built during the Renaissance…

And I think at last how much depends on lofty spaces, and on silence, and on prayer:

12 thoughts on “I think of Cordoba”